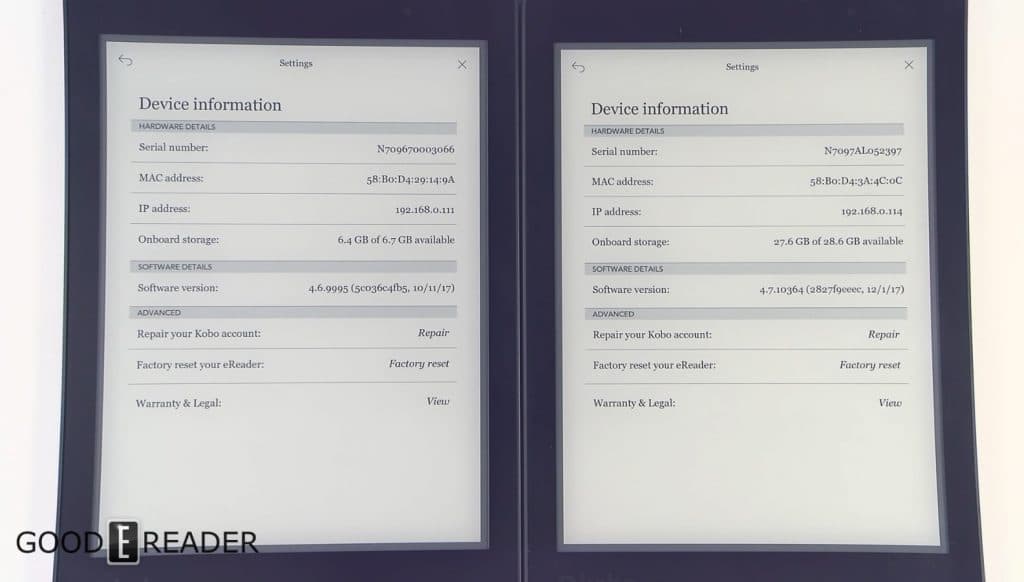 The Kobo Aura One Limited Edition is now available for $279 and the original Kobo Aura One that came out in 2016 retails for $229. In this comparison video we take a look at the things that are different about these two e-readers. We primarily focus on the revised frontlight experience and the rapid page turn engine. There are also some subtle differences with the UI and you can get a sense if the Limited Edition is suitable for your needs.

Both of these e-readers have the same core hardware specs. They feature a 7.8 inch E-Ink Carta touchscreen with a resolution of 1872 by 1404, which works out to a crisp 300 pixels per inch. The screen is completely flush with the bezel, which gives you a wider area to turn pages in e-books or pinch and zoom PDF files.

One of the big selling points is the front-lit display, which comprises of 9 white LED lights. E-Readers have employed this type of technology for a number of years and it allows you to read in the dark or low light conditions. Unlike smartphones and tablets that have a backlit display that projects light upwards, a front-lit display has the LEDS on the bottom of the bezel and project light evenly across the screen. What makes the Aura One Limited Edition so unique is that it has an additional 8 RGB LEDS that project warm light evenly across the screen. These two LED systems allow you to utilize the Kobo Comfortlight system. This effectively mutes the luminosity with different shades of red and orange.

Underneath the hood is a Freescale 1GHz processor and 512 MB of RAM. There is 32GB of internal storage on the Aura One Limited Edition and 8GB on the Aura One. There is no expandable storage via an SD card, but I really don’t think that matters.

Both of these devices are waterproof and are the only e-readers on the market that have Overdrive built into it. You browse the Kobo bookstore and if a title is available at your local library it will have a borrow icon, which you can use to read the ebook for free.

The Aura One Limited Edition has some subtle UI tweaks. If you click on the top right hand corner the Kobo bookstore now says Shop, whereas the original Kobo Aura simply says Browse. The LTE also has a new rapid page turn engine, which allows you to skip ahead or backwards.