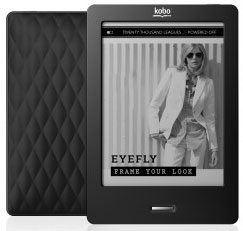 The Kobo Touch with Special Offers is officially released today and the company has heavily borrowed from the success of the low cost Amazon e-Readers. The new Kobo Touch with Offers is a lower-priced, ad-supported eReader that offers the same features and benefits as the Kobo Touch, but includes valuable offers and ad sponsored screens.  The ads appear when the eReader is powered off or in sleep mode, as well as in other discreet places outside of the reading experience (for example, on the bottom of the home screen).  Available in the United States only, the sleek and slim Kobo Touch with Offers is available in Black, priced at $99.99 and is now in-store and online at Target.com and at Kobo.com.

Amazon was the first company to pioneer the subsidization of the hardware in-order to display advertisements within the reader. Due to backlash from customers not knowing the difference, the company instituted a new method to remove the advertisements by paying a extra $30.

Hardware and software wise there is no major distinction between the Kobo Touch and the Kobo Touch with Special Offers, other than one displays ads and one does not. I foresee the new cheaper model to be a great stocking stuffer for someone getting into e-readers for the first time. The advantage Kobo has against its competition is the fact it is heavily invested in social media with “Reading Life” and “Kobo Pulse.” You can earn awards and achievements for reading books and monitor your reading habits. Kobo Pulse will be introduced to both models of the Touch within a month.