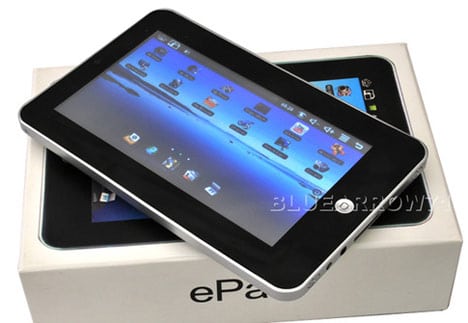 There has been a tremendous amount of new e-readers to have come out this year in North America, such as the Spring Design Alex, Kobo E-Reader and many more on the way. Companies such as Fujitsu, Asus, Samsung and Plastic Logic are all using new e-readers later on this year.

Most of the attention with E-Readers is on the North American market, but there any many Asian companies, most notably in Korea, Taiwan and China that are capitalizing on the demand for e-readers, both in their own countries and for export. Although, a fair amount of new electronic readers are coming out of the Asian markets, there is little development in content distribution systems.

Speaking of no content distribution system, Chinese manufacturer Eken has released a new E-Reader tablet named the Eken M003 ebook reader. It currently runs Google Android 1.6 and has a full color 800×480 resolution 8″ LCD display. It has a 600MHz VIA processor, 802.11a/b/g Wi-Fi, 128MB RAM, and an SD card slot for up to 32 GB of extra memory.

Other features include support for MSN, Google Talk, an audio input and output, two stereo speakers, and comes pre-installed with the Google Chrome lite browser.

The Eken gives you allot of different color options for the e-reader too, you can choose between white, black and pink. It also will retail for less than $240.00 US.

In our opinion this looks like a neat little e-reader, but there seems to be no 3G connectivity and it is rather light on RAM with only 128MB. Although this e-reader will allow you to access the Google Android market place to download applications, there is no content distribution system. So if you want to load it up with E-Books you will have to find them yourself, good thing Google Market place has Kobo, Amazon, Barnes and Noble and other applications.

For the latest E-Books, check out our Good E-Reader Book Store! E-Book downloads via a subscription, instead of by the book!