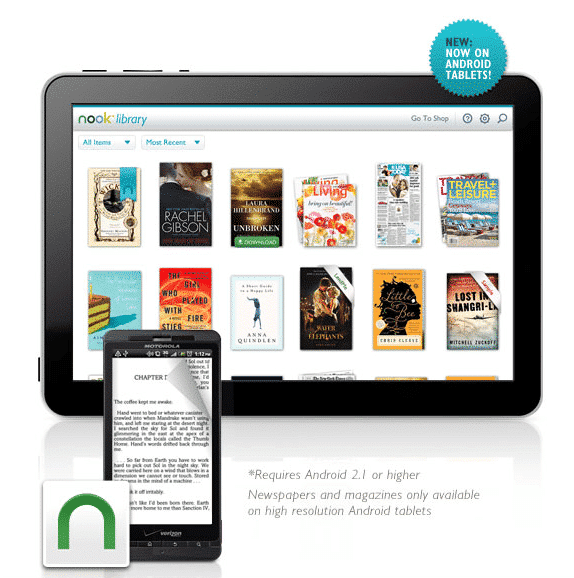 We reported just a few days ago that the Nook’s e-reader firmware that will receive an update, in November. We just got word that the Nook app for Android too is poised for an upgrade as well.

Barnes & Noble has announced version 2.3 of the Nook app for Android will go on air towards the end of this week and will also include some important enhancements.  The update will now allow users to carry out such tasks like jump straight to a specific page number of a book, to perform search within a book, view notes and highlights or to remove e-books from your library.

These apart, the home screen has also been worked upon and now look refreshed while there are also some enhancements incorporated that aims to make such basic tasks as reading or side-loading of content much more convenient.

While the update of the Nook Android App may not be as significant as the Nook e-book reader’s firmware upgrade which, as per Barnes & Noble, is the most important since the launch of the Nook, the update nevertheless does come with many new features. So there you have it. All those who have been using the Nook Android App, watch over for the update. You will be able to update it for free via the Google Android Market.

Also if you are looking for a new e-reader, you can try out shopereaders. They have on stock all the top e-readers like the new Kindle, Kindle DX, Sony PRS – 350, Sony PRS – 650, Kobo, or the  Barnes & Noble Nook. They ship world wide, have on offer the best deals and will not forget you after you have bought the device.