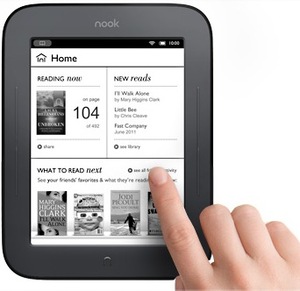 With e-books making their presence felt in libraries across the world, it was perhaps just a matter of time before e-book readers also made it to the library’s lending section. This is exactly what has happened at the Michigan based Willard Library and the device in question is the Nook Simple Touch. Members of the Helen Warner Branch of the library will get to borrow the Nook Simple Touch e-readers for a maximum of 4 weeks, though the members also need to have a valid credit card in addition to a library card.

Each of the Nook Simple Touch devices will come pre-loaded with several of the bestseller titles that feature in the most recent New York Times’ fiction and nonfiction bestseller lists and are updated at the start of every week to keep the e-book readers fresh with the most recent titles.

Anne Holcomb, Media Librarian at Willard Library, said: “These Nook Simple Touch devices are the most convenient choice for Spring Break vacations or catching up with the latest books. There’s no downloading required – all the titles on the eReader’s ‘Library’ screen are already on that device. After you it out, just touch the picture of a book cover to start reading.”

The Nook Simple Touch devices that are lent out are encased in a protective jacket and will understandably come bundled with the charging chord to let users to charge up the device during the 4 weeks loan period.

As for the Nook Simple Touch e-reader’s contents, Holcomb has stated the e-readers will come pre-loaded with the entire Hunger Games trilogy. Those books should be one very enticing reason to go for the e-readers.