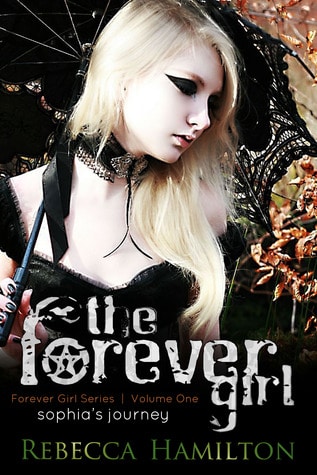 This week’s GoodeReader eBook of the Week title is The Forever Girl, an adult paranormal fantasy, by Rebecca Hamilton. Solving the mystery of an ancestor’s hanging might silence the clashing whispers in Sophia’s mind, but the cult in her town and the supernaturals who secretly reside there are determined to silence her first. As Sophia unknowingly crosses the line into an elemental world full of vampire-like creatures, shape shifters, and supernatural grim reapers, she meets Charles, a man who becomes both lover and ally. It’s not until someone nearly kills Sophia that she realizes the only way to unveil the source of her family’s curse: abandon her faith or abandon her humanity. If she wants to survive, she must accept who she is, perform dark magic, and fight to the death for her freedom.

“Writing a book was on my bucket list,” explains Hamilton. “I tried many times to write a book but never finished anything. I don’t know what happened, but finally something ‘clicked’ and out popped a book. It was meant to be a standalone. While writing it, it turned into a trilogy. While editing it, it turned into a series of seven novels and a few related novellas. I also wrote a few other books after that, but haven’t edited those yet. But I’d say finishing that book is when I went from just wanting to cross ‘write a book’ off my bucket list, to ‘I want to be a WRITER.’ My book, The Forever Girl, is the first in the Forever Girl series. I’ve also written a horror novel that may never see the light of day and a Literary Fiction novel that is close to my heart but may take ages to revise.”

Hamilton explained the process behind her decision to self-publish her title, along with the subsequent books in the series.

“The publishing journey was long. Before I started querying agents, they started querying me (they saw my work on an online slush pile) and I think that gave me a false confidence. I started querying too soon because of that attention. I also had three publishers query me about The Forever Girl after reading samples online as well. (Harper Collins, Penguin, and Harlequin). I was hesitant to send because I knew at that point that the manuscript still needed work. They insist I send, that that is what editors are for. Unfortunately, they didn’t have confidence that I would be able to pull the story together, though they said some very nice things about the writing itself. Two of those publishers ultimately passed. The third (Penguin) never got back to me. They, along with many of the agents I encountered, all wanted to see my next project. The problem was that I mentally just could not move forward without this project fully off my plate, which meant publishing it. Now I’m an indie publisher (started my own publishing house, too, to help other authors!) and I LOVE it. I am not sure that I would take on a US publisher at this point unless they had a really solid deal to offer me up front. My book is doing a lot better than most new releases by debut authors of mainstream publishers, so in the end I think no matter how you publish, readers will ultimately decide what they want.”

To receive your copy of The Forever Girl, email the author at theinkmuse@gmail.com and be sure to specify if you need a MOBI or ePub version of the ebook.