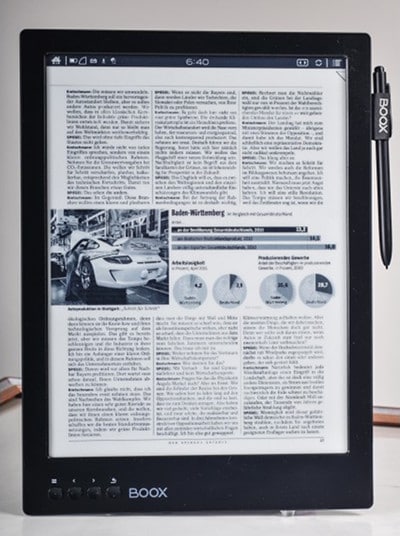 Onyx Boox has just announced their second generation 13.3 inch e-reader and instead of using an E Ink Mobius screen, it is employing Carta. It continues to rely on the stylus and does not have a touchscreen layer.

You can connect up to the internet via WIFI and it also has Bluetooth, but I am not sure it has a USB host controller for a keyboard. It ships with Android 4.0, but Onyx says it will support 4.4 sometimes in the future. There is also a speaker and a 3.5mm headphone jack to listen to music or audiobooks and it also has a tiny microphone.

The Onyx Boox Carta is retailing for $853 US and is up for pre-order and they say it is shipping out on April 20th.