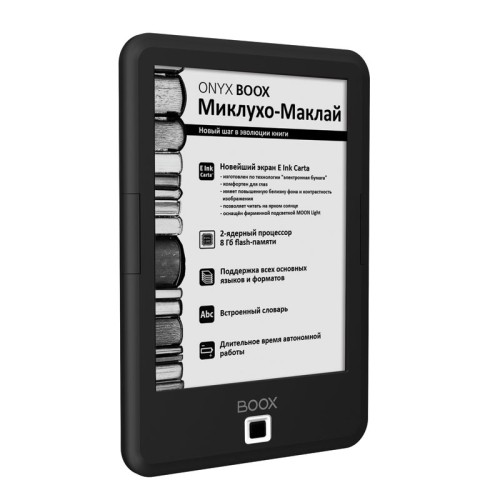 has been heavily targeting Russia the last few years with Android driven e-readers. The company normally attaches a pirated version of Google Play in order to give customers a viable app store to install whatever apps they desire.  Onyx has just released the first new e-reader of 2016, the six inch Maclay.

The Onyx Boox Maclay  features a six inch e-ink Carta capacitive touchscreen display with a resolution of 1024 x 758.  Like most e-readers currently on the market, this one also has a front-lit screen, so you will be able to read in the dark.

Underneath the hood is a 1GHz dual-core processor and  512MB RAM. There is  8GB internal storage and a MicroSD.  Users will be able to connect up to the internet via the WIFI connection, but there is no Bluetooth or audio capabilities.  There is a 1700 mAh battery in this unit, which means you should be able to get about 2-3 weeks of moderate usage.

There is no word yet if this e-reader has Google Play, none of the screenshots show any type of app store. There is also no mention of being able to load in your own apps.

The Onyx Boox Maclay is available now for around $100 USD  and can be purchased from their Russian website.