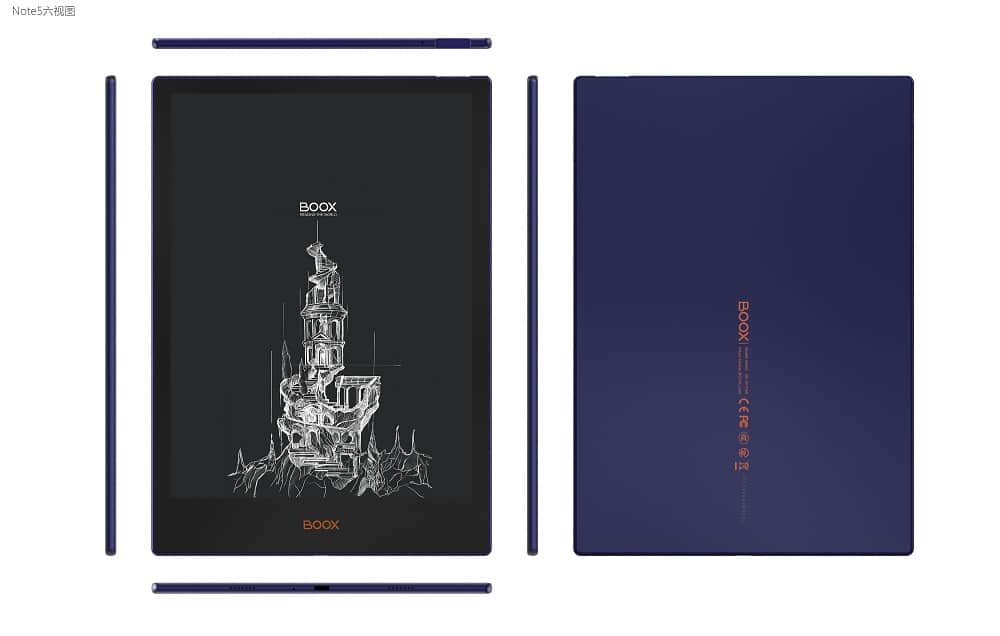 Onyx Boox is going to be releasing the Note 5 at the end of the month. This is their flagship digital note taking device and ebook reader. It has a giant 10.3 inch screen which makes it perfect to read A5 documents. It is running Google Android 11 and has full access to the Play Store, which makes it very compelling for someone who wants a multipurpose tablet with an E INK screen.

The Note 5 has a 10.3 inch E INK Carta HD display with a resolution of 1404×1872 with 226 PPI and 16 levels of greyscale. It has a flush screen and bezel design and has a layer of glass protecting it. There are a series of white and amber LED lights, which should help you read at night, in addition to the amber ones providing a warm candlelight effect.  There is WACOM integration, which is primarily used for interacting with the display with a stylus. There is a dedicated note taking app, with some great features. It is also possible to edit PDF files and ebooks.  There is a screen protector that is installed on the factory, so you don’t need to install it yourself, this is a special one that Onyx developed, they call it writing film, and there is more resistance when writing on the screen with the stylus.

Speaking of the stylus, Onyx has developed a brand new stylus called the Boox Pen Plus, which give get for free with the purchase from Good e-Reader. It is blue and has a hexagonal design. They have all new nibs that make writing a pure joy. The pen is also magnetic and attach itself to the device.

Underneath the hood is a Qualcomm Snapdragon 662 Octo-Core processor, 4GB of DDRX RAM and 64GB of internal storage. It has speakers to listen to audiobooks, podcasts or music. There is also Bluetooth 5.0, which can be used in conjunction with wireless headphones or various Bluetooth accessories, such as keyboard. Charging and transferring of data is done via the USB-C port. It is powered by a 3,000 mAh battery, which should provide a couple of weeks of daily usage. The weight is 380g and is 5.8 mm thick.

The Note 5 is running Google Android 11, which is very current, by e-reader standards. It has enough security patches and updates. You will have full access to the Google Play Store, to download millions of free and paid apps. What I like about modern versions of Android is that virtually any app is compatible with it, so you won’t run into compatibility issues.

The Onyx Boox Note 5 will retail for $569.99 and will come with a free case and the new Onyx Boox Stylus Plus. Pre-orders will begin on the Good e-Reader Store on October 27th and will start to ship out on November 8th.