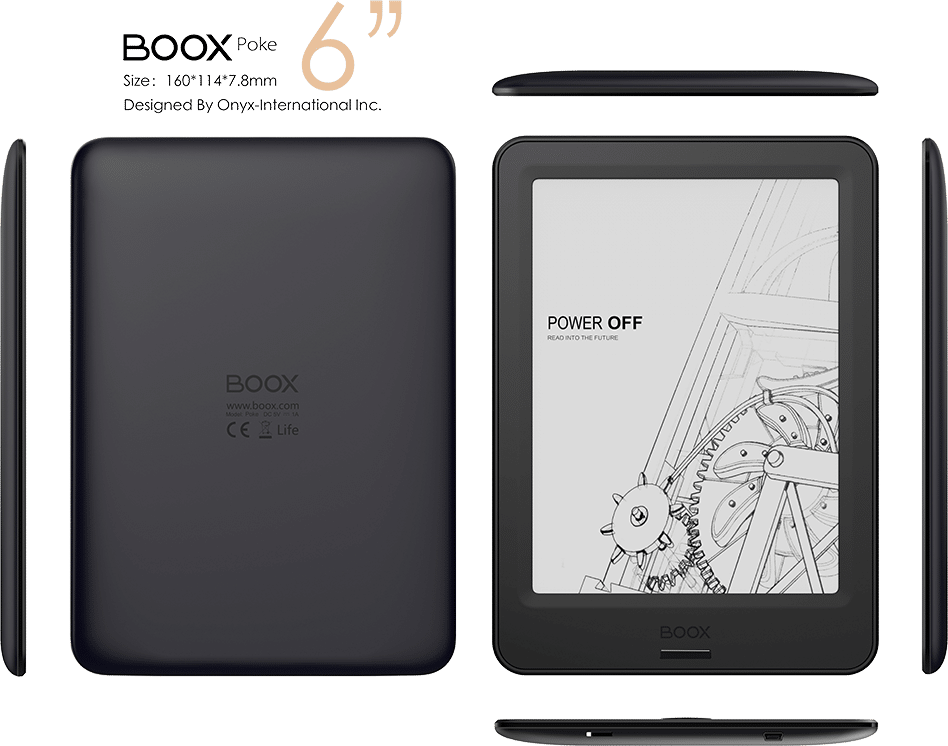 The Onyx Boox Poke is the first six inch e-reader that has a quad-core processor. This device is running Android, so the extra power will really make a difference when running apps such as Kindle, Kobo or Nook.

The Onyx Boox Poke is the world’s first quad-core e-reader. This device is available now for $159, which is rather solid for the hardware specs it provides.  The Poke features 6 inch E-Ink Carta HD display with a resolution of 1072×1448 with 300 PPI. This device has a front-lit display and color temperature system, to give a candlelight effect.

Underneath the hood is a 1.2 GHZ quad core processor, 1GB of LPDDR3 memory, 8GB of internal storage, 2500 mAh battery, USB-C, WIFI  and is running Android 4.4. Bluetooth plays an important role on the Poke, because the device does not have a 3.5mm headphone jack. You can listen to audiobooks or play music while you are reading.

Since this is using an older version of Android, I would recommend to use Lite and Go apps for increased performance. Most modern apps require a higher version of Android, such as 6.0 or above. Lite and Go apps were primarily designed for lower-end smartphones, but do a phenomenal job on e-readers.  You can download these apps from Google Play, which ships on the Poke or download them from the Good e-Reader App Store.

The Poke is powered by a 2500mAh Li-Polymer battery, which should give you three weeks of usage, less if you leave WIFI on and are using Android apps. Dimensions are 160x114x7.8 mm and weights less than 175g.

The Poke is considered an entry level e-reader and retails normally for $159, but is on sale for Cyber Monday for $139.

This device does a respectable job reading ebooks and manga, the PDF experience is not the greatest, since it only has a six inch screen. If you are looking for an Android e-reader from a company that has been around for almost a decade and isn’t going anywhere soon, the Poke is a solid investment.

I would recommend to buy the Poke PRO, instead of this model. Confused on the differences between the Poke and the Poke PRO? The regular Poke has a quad-core 1.2GHz processor with 1GB of RAM and 8GB of storage space. Meanwhile, the Poke Pro has a quad-core 1.6GHz processor with 16GB of storage space and 2GB of RAM. The other big difference with the Pro model is that it is using Android 6.0, while the regular Poke has Android 4.4. Both models have a 300 PPI, E Ink Carta display with a capacitive touchscreen and a frontlight with adjustable color temperature system.

In the two videos below Peter documents the industrial design, how the menus and UI look and takes a gander at the digital reading experience. He also dims the lights and demonstrates how the front-lit display and color temperature system perform.