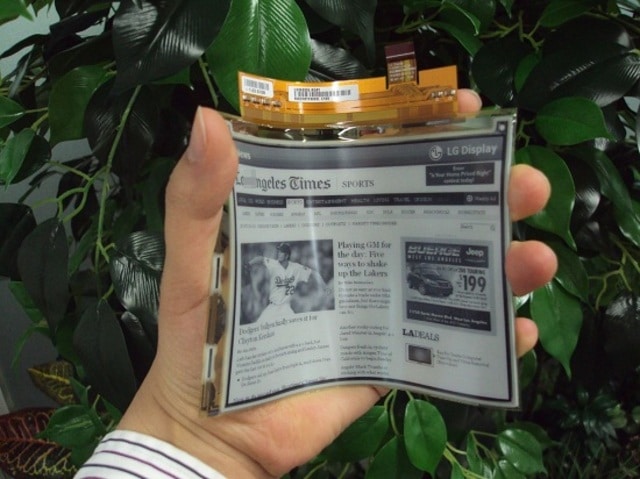 Back in March, LG revealed new e-paper that should give e-ink Holdings a run for their money. One company that is interested in using this technology is Onyx, who is well known for their BOOX series of e-readers. Their new device using Plastic Paper will be launching sometime this month.

The new e-Paper by LG features a inch XGA display with a resolution of 1024 x 768 pixels and relies on e-ink to render a monochrome display of texts and images. However, the biggest USP of the EPD is its ultra thin construction. This has been achieved with the use of plastic that is as thin as a display guard used on cellphones. This has resulted in the EPD being just 0.7mm, about a third in size from similar EPD that are made of glass. The use of plastic has also made the LG produced EPD weigh just 14 gms. This in turn has added to the durability of the display, something brought forth in repeated drop tests performed by LG. The e-papers were dropped from a height of about 1.5 meters, and the displays not only survived each time but also remained very devoid of any scratches. Even hitting the displays with a small urethane hammer failed to leave a mark on the e-paper displays.

According to our Russian Source, Onyx will be launching an e-reader similar to the Onyx Boox A62. It will feature a Freescale i.MX508 Cortex A8 processor that runs at 800 MHZ. There is going to be 4 GB of internal memory and 128 MB of RAM, and I am a bit worried about the amount of RAM in a touchscreen display. One of the things this device will have going for it is the sheer amount of ebook formats that it will read. How about this for a format list? TXT, TXT.ZIP, HTML, RTF, RTF.ZIP, FB2, FB2.ZIP, DOC, DOCX, MOBIPOCKET, CHM, PDB, EPUB (DRM), EPUB (non-DRM), JPG, PNG, GIF, BMP, TIFF, CBR, CB7, CBZ, PPT, PPTX, XLS, XLSX, DjVu, PDF (DRM), PDF (non-DRM).