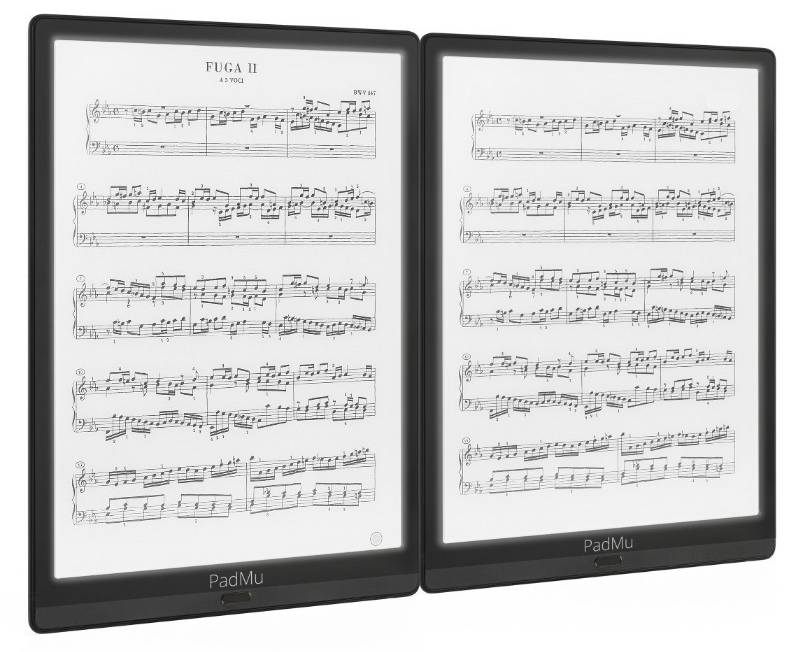 Padmu is a great company that exclusively focuses on musicians. They developed their own operating system for Android that allows users to sideload or purchase sheet music in PDF. You can edit or make annotations with them via an accompanied stylus. Page turns can be done with virtually any Bluetooth enabled foot pedal or other type of device, it can even be plugged into the USB port and no drivers are necessary, due to OTG. Padmu has always offered a single screen and dual screen variants, the duals give you the closest experience to paper sheet music.

Padmu has always offered Onyx Boox products and rebranded them as their own. The current offering is the brand new Padmu Lumi, which is based on the Onyx Boox Max Lumi. There are two operating systems, you can boot the device into the Padmu mode, and also boot it into the standard Boox OS, so you can get full access to Google Play and their note taking/ebook reading app. You can download over a million paid and free apps. So if you want to take a break, you can play round of virtual blackjack, listen to a podcast via Bluetooth headphones or just read a good ebook.  Padmu does not make an app for Android, so you will need the Padmu version of the Lumi in order to get the most out of your sheet music.

The Padmu Lumi features a single or dual screen 13.3 inch E INK Mobius and Carta HD displays, with a PMMA flat cover-lens. The screen is flush with the bezel and it is made of glass. The resolution is 2200×1650 with 207 DPI, which will be great for reading ebooks. This device is primarily geared towards taking notes and editing PDF files, the A4 sized screen can read them, without having to pinch and zoom. The WACOM layer has full support for palm rejection and the accompanied stylus has 4,096 degrees of pressure sensitivity, the harder you press, the thicker the lines will be.

This is the first 13.3 inch device that has a front-lit display and color temperature system. There are 36 LED lights total, 18 white LED lights and 18 amber LED lights. The light distribution is absolutely insane, there is no blotches or dark areas of the screen, when brightness is cranked to the max. Padmu’s competitors such as the Givido does not have a front-lit display.

Underneath the hood is an Qualcomm Snapdragon 636 processor with eight custom Kryo 260 cores at up to 1.8 GHz, an Adreno 509 GPU, 4GB of DDR4X RAM and a whopping 64GB of internal storage. You will be able to connect up to the internet via Wi-Fi (2.4GHz + 5GHz) and also has Bluetooth 5.0. You will be able to connect the Lumi to your PC or MAC with the USB Type-C port, this port also supports OTG for driver free accessories, such as a keyboard. It is powered by a giant 4300 mAh battery, which provides up to six weeks of standby mode. Quick Charge 4.0 can provide 2/3 of the battery power to the Lumi in just two hours. There is a fingerprint sensor, which allows you to lock or unlock the device, which adds a bit of security from unauthorized access.