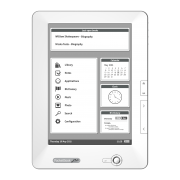 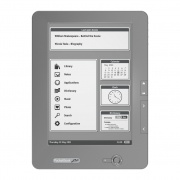 Pocketbook has upgraded their large screen e-reader from  previous versions such as the 902 and 903 models with the Pocketbook 912.

This new e-reader features a 9.7 inch screen with Vizplex e-ink technology. It has a resolution of 1200×825 pixels and 150 DPI. The processor seems to be lacking at 533 MHZ and has minimal RAM with 256. Internal storage on the new 912 is limited to 2GB of Flash memory and you can expand it up to 32 GB via Micro SD.

The hardware is designed very solid and looks very professional. It looks much akin to the 902 in terms of  pure visual aesthetic. You have your page turn buttons, DPAD, power button, and more.

I really dig the fact it has two speakers and an audio jack to listen to music or audiobooks. Many new devices coming out these days do not even have onboard audio. The Nook Simple Touch and Kobo Touch are all guilty of this! Pocketbook has been doing audio on all of their e-readers for quite some time, but this of course boosts the price.

Pocketbook is notorious for its solid e-reading abilities in its capabilities to read a myriad of book formats. It currently supports PDF (ADOBE DRM), EPUB (ADOBE DRM), PDF, EPUB, FB2, TXT, DJVU, RTF, HTML, CHM, DOC, DOCX, TCR, FB2.ZIP. You can read any of the 1,000 books that are included with the purchase of the device or you can load in your own.

If you decide to buy EPUB books from many stores on the internet such as Kobo, Barnes and Noble, Smashwords, and others, you can use Adobe Digital Editions to put them on your reader from your PC.

The Pocketbook 912 has WIFI built in and allows you to connect up to its Bookland site that has thousands of free and open source books! You can also surf the web via the web browser.

Pocketbook continues to lead the charge for international reading. It supports 26 languages for books and can change the settings and menus to those as well. Their is also dictionary support for all 26 languages so unlike most other e-readers this one can be used by people all over the world.

The new Pocketbook 912 was just shown off at IFA in Berlin and the folks told us that a Russia and European Release will take place in October and USA/Canada in November. No word on price officially, but unofficially we heard $380.