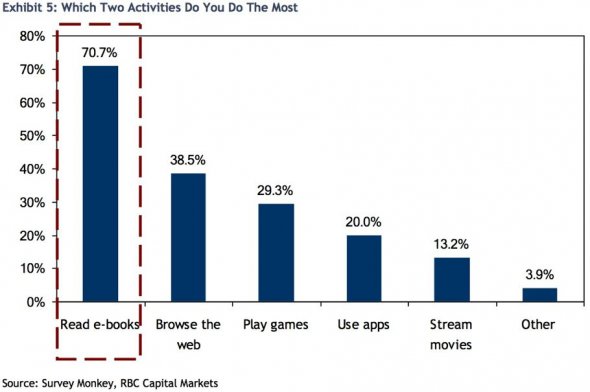 RBC Financial Groups has released data on a monumental survey they recently did on the habits of Kindle Fire Owners. The company today posted a ton of slides on a myriad of factors and what people actually do with their tablet. Most industry executives including the VP of Barnes and Noble said the Kindle Fire was nothing less then a media consumption device where people only watched movies and streaming media. The poll really speaks otherwise with 58% of all people never even watched a single movie via Netflix, Hulu or Amazon Prime. According to the survey results 70% of owners actually use the device primarily for reading. How much reading are people really doing with the device purchasing ebooks directly via Amazon? It seems only 3-5 books were the average consensus with 28% of the poll data.

According to the recent results it seems most people who purchased a Kindle Fire did so when it was first released with 34% of owners buying it between November 15th and the 30th.

We posted all of the data in a series of slides so if you are interested in seeing the entire range of usage statistics on the Amazon Kindle Fire, you may find it as interesting as we did.