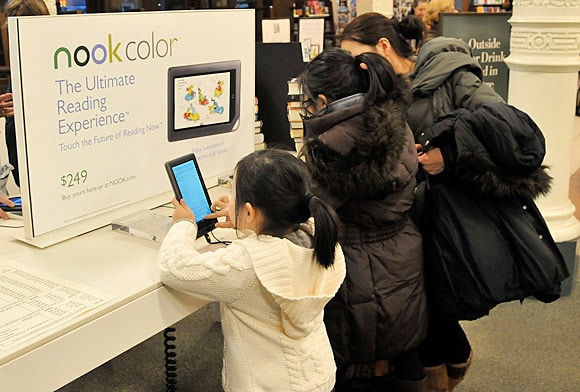 Last month the VP of Digital Content at Barnes and Noble Theresa Horner announced that they intend on bringing a new Nook to the UK in the spring of this year. The company is seeking to expand its Nook offerings outside of the USA into one of the largest markets, the UK. Over the weekend two different reports were issued that expanded on the potential deal.

Bloomburg has reported that the company intends on partnering with Waterstones for distribution in the UK of a new version of the Nook. The new device will be optimized for international use and be sold in over 300 physical locations. “If they do increase the distribution for the product, it’s obviously a benefit for them,” Michael Souers, an analyst for Standard & Poor’s in New York, said in an interview. “Amazon is still the behemoth in the market, and has the upper hand because they were the first mover in the majority of markets.” Selling it in the retail sphere is tremendously important and really is how the Nook really took off to begin with. Having the weight of every B&N store and many other big box retail outlets hustling your product is a good way to garner some attention.

The second article to touch on the subject was an amazing article featured in the New York Times which everyone should read. The Times basically interviewed a wide array of engineers and industry insiders on the entire B&N business model. They claimed to have first hand knowledge that a new e-ink based device is nearly complete and will be marketed exclusively to the UK.

Obviously in order to compete with Amazon which is embedded in major markets with its line of e-ink devices such as Canada, US, UK, France, Germany, and Spain the book retailer is playing a game of catch up. The Nook does very well in the USA but not the rest of the world. A successful UK launch would mean the company would put a higher priority on expanded markets and would make the Nook a household name.