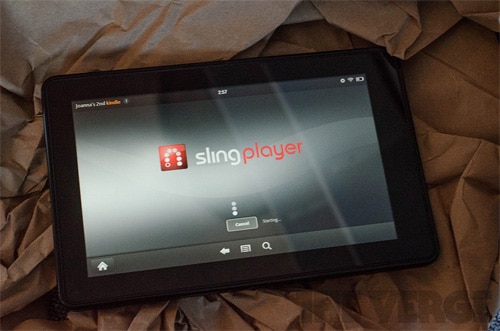 Sling Media’s Sling Player app has been available on almost all tablet devices one can think of except the omission of one key tablet device — the Kindle Fire. However, all of that is set to change with the Sling Player finally ready to make its presence felt on what can be termed the flag bearer of the Android tablet bastion right now. Apart from of course the Amazon tablet, one also need to have with a SlingBox Solo or Pro-HD set-top box to get going with the movie streaming app.

However, while all of this is welcome on the Kindle Fire device, the only grouse can be that the Sling Player app for the Amazon tablet is sans the remote control interface and SlingBox guide that part of the standard package for all other tablets running Android Honeycomb. So its a lot of buttons that one has to deal with along with the television operator’s cable guide which is several notches below the slick and inviting controls that’s available on the Honeycomb version of the Sling Player.

The app is available for download from the Amazon Android App Store for $30.