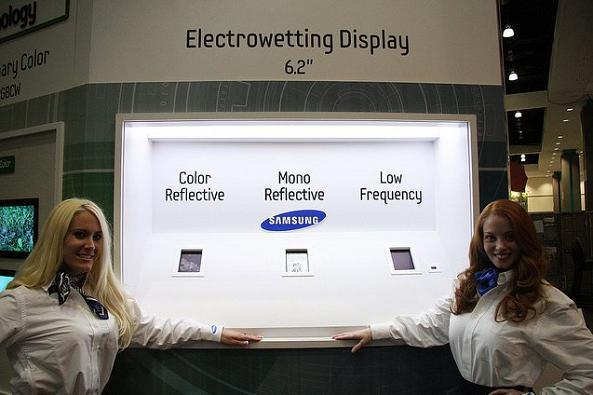 We have heard quite a bit of ElectroWetting tech when all of it belonged to Liquavista back in 2010. Now ElectroWetting displays are back in the news, though this time it’s Samsung calling the shots since the Korean giant had bought the display firm in 2010.

As for the ElectroWetting displays, Samsung has stated it’s likely to enter mass production in 2013. The announcement was made by the head of the Samsung LCD Netherlands R & D Center (SNRC), Johan Feenstra, who has been associated with the research behind the display since its inception in 2002. Feenstra also revealed they have larger 9.7 inch sized displays in the pipeline as well, in comparison the the smaller (6 inch or so) displays that Liquavista had visualized for e-readers.

So while it’s still almost a year left before we can expect to come across e-readers featuring the ElectroWetting displays, the wait can be well worth it considering the huge improvements it has come to signify over contemporary e-ink based displays that are currently ruling the roost in the e-reader market. Refresh rates will be far better than we have seen, while being capable of displaying both color and black and white displays with equal quality. However, one of the biggest USPs of ElectroWetting tech is its extremely frugal power requirements, which means the already impressive battery performance of e-ink based e-readers will improve even more.

However, one concern can be the price of such e-reader featuring ElectroWetting based displays, as e-readers prices have come down drastically over the years. The latest generation Kindle e-reader costs just over $100 and it will be interesting to see how the ElectroWetting based e-readers cost when it’s launched about a year from now.