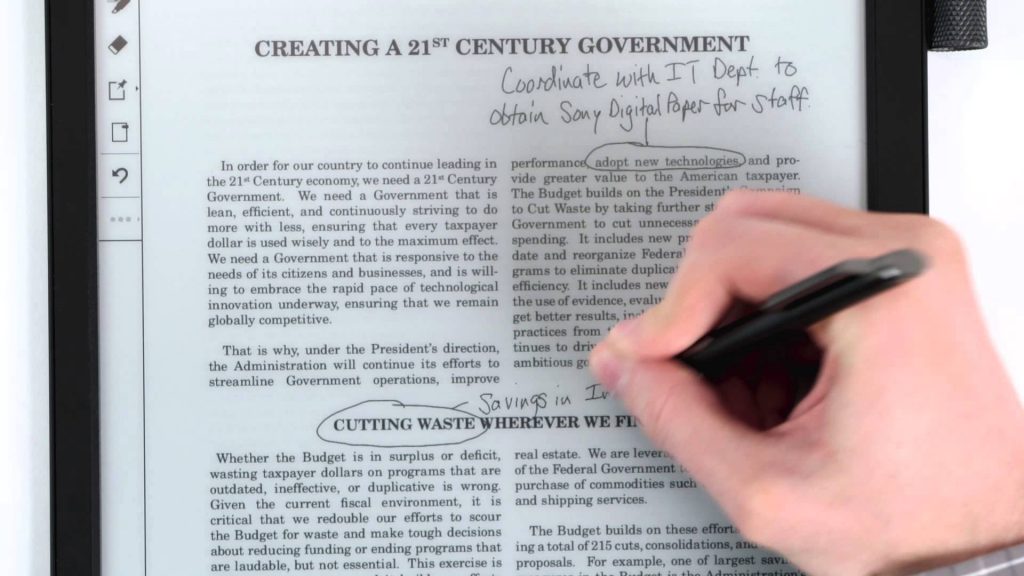 Sony has finalized development of a new Digital Paper digital note taking device and it will be released sometime in the next six months. It will feature a 13.3 inch screen and will be a replacement for the DPT-RP1 that came out last year.

Rumors in the upstream supply chain suggest that the new Digital Paper will have an E Ink Carta and a Mobius screen. Internal storage will be doubled from previous models and the stylus will undergo an extensive redesign. One of the big things Sony wants to do with the stylus is being able to crop and copy PDF documents and save them as individual file. This is similar to the way the Firefox internet browser handles it with the mouse.

Sony also plans on innovating the software experience and changing the way backgrounds are downloaded. Currently you can only download additional backgrounds from the Sony website, but they are changing it so they can be delivered with the Desktop software.  I have also heard they are working on some enterprise features.

The Digital Paper has been on the market since 2014 the and product has seen multiple generations. The landscape has changed in the past few years due to increased competition from companies like Remarkable and Onyx.

Last year Sony and E Ink formed a co-partnership called Linfiny and the Digital Paper 2019 edition will be a byproduct of this relationship. Sony has received a massive discount on the screens, so they can focus on the added costs of software development, which hasn’t really changed in the past three years. It remains to be seen if Sony will scrap the CP1 10.3 inch model, since it hasn’t sold well.