You are here: Home / Barnes and Noble Nook / The B&N Nook is on its deathbed 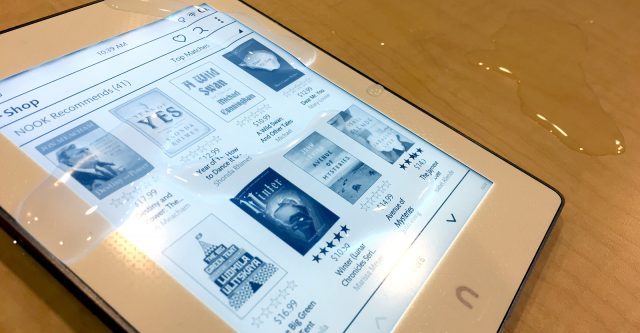 Barnes and Noble has no plans to release a new e-reader this year and the bookseller has moved the entire Nook section to the back of the store in almost 600 locations in the United States. The old display areas have been torn down and thrown in the garbage.  The Nook e-reading app for Android and iOS has not been updated since April and I have been told by the engineers that there will likely be no further updates until 2019.  The Nook Audiobooks app, which is not even promoted, last saw an update in February 2018. I suppose it is now safe to say that Barnes and Noble no longer cares about the Nook unit.

Over the course of the past three years B&N has been slashing costs in the Nook division, hoping to make it profitable. The company fired most of their staff and outsourced all firmware and software development to an Indian firm, but they are doing a terrible job. Last year B&N also proclaimed that they are no longer in the technology business and will focus on selling books online and in their retail stores.

A few months ago Barnes and Noble fired Chief of Digital Fred Argir. The bookseller did not publish a press release or mention it during their latest quarterly financial report. He was initially hired by former CEO Ron Boire to gut the Nook division. Under his watch the Nook App Store and Nook Videos was shuttered. The Silicon Valley R&D office for Nook was also closed down and B&N ceased to design their own hardware and just outsourced it to Netronix.

William E Wood has just been promoted internally to the new Chief of Digital. He previously was Chief Information Officer for Barnes & Noble from December 2015 to July 2018. B&N has refused to make him available for an interview and Wood has not mentioned how he expects to turnaround the Nook and the digital bookstore, but it is likely he does not have a plan and will instead focus on the website to drive physical book sales.

It is very likely that B&N is on its last legs. The 1st generation Nook was recently discontinued and is no longer supported. There is a rumor flying around that they will also suspend support for most of their other e-readers that are more than a few years ago. Management has no interest in competing against the Kindle. Kobo is going to further erode their market share in the coming years, as the company is now selling e-readers, ebooks and audiobooks in thousands of Walmart stores across the nation.