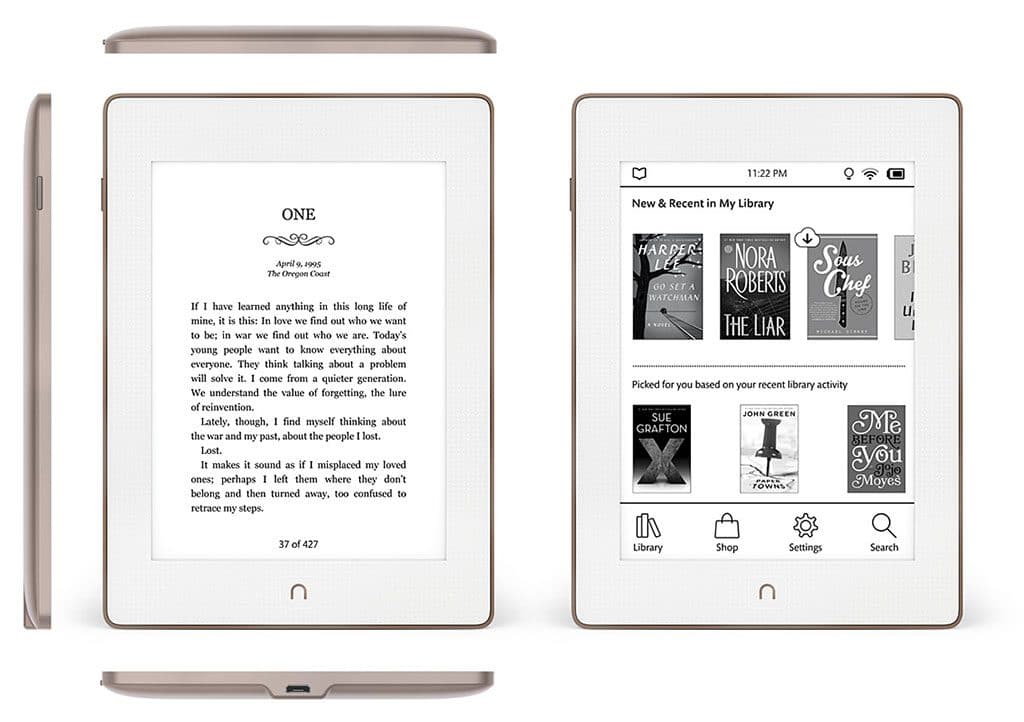 Barnes and Noble has proclaimed that they are no longer in the tech business and they don’t have the culture or financing to compete with the likes of Amazon and Google. The bookseller will only focus on the growth of their retail stores going forward and are not going to innovate with the Nook.

Barnes and Noble conducted their annual shareholders meeting today and chairman Len Riggio had dire news for a Nook turnaround. Riggio explained that when e-book sales began exploding several years ago, B&N felt it had no choice but to enter the digital market. Instead, according to Riggio, B&N will focus on its physical stores and will partner with technology companies to keep a presence in the digital space. “There is no business model in technology” for B&N, Riggio acknowledged.

The first indicator that Barnes and Noble was abandoning the Nook was when they cancelled their agreement with Microsoft to sell e-books on the Windows platform to customers in Europe. Next, they closed their digital bookstore in the United Kingdom and stopped selling Nook e-readers through their retail partners. The bookseller than closed their Nook App Store and Nook Video platform in the United States and then outsourced all firmware development for Nook e-readers and the Nook app to a company called Bahwan CyberTek. In 2017 Barnes and Noble moved the Nook section from the front of the store to the back, where the customer service section is.

According to the report by Len Riggio it now looks like Barnes and Noble will not internally design new e-readers and tablets going forward, instead they will outsource it. Barnes and Noble has always had their e-readers manufactured by Netronix and over the past four years their tablets were sold in partnership with Samsung. The B&N The Nook Tablet 7 was issued earlier this year and it was the first Nook branded tablet in a very long time. It was designed and manufactured by Chinese manufacturer Shenzhen Jingwah Information Technology Co.

The big question is who has the capability to design and manufacture Nook branded hardware in the future? Bahwan CyberTek does not have enough experience designing hardware, they are primarily a software and SAAS driven company and Shenzhen Jingwah Information Technology Co only makes tablets. This means either Barnes and Noble would have Netronix design something in-house or partner with Boyue or Kobo.

Kobo makes the most sense because they have no presence in the United States. CEO Michael Tamblyn has stated on many occasions that the US market is saturated and Amazon dominates it so completely that Kobo can only be viable if they focus on international markets. While this might be true, there is another story that does not get much press. Kobo had an exclusive agreement to sell e-readers and e-books at Borders. When the bookseller went bankrupt in 2011 this exclusivity agreement was lost in various court battles over Borders assets. This is why Kobo was unable to partner with other stores, like Booksamillion. The only thing Kobo was able to do in the US was partner with the American Booksellers Association to have indie bookstores carry Kobo branded e-readers and earn an affiliate fee when their local customers purchased e-books. Sadly, many bookstores did not want to carry e-readers and Kobo has zero visibility in the states.

Kobo has a ton of experience taking over ailing digital bookstore businesses and turned it into a highly successful revenue model. The Sony Reader Store, Blinkbox Books, Flipkart, Sainsbury’s, Waterstone’s all stopped selling e-books and all of their customers were transferred over to Kobo. In 2017 Kobo purchased the Tolino brand from Deutsche Telekom and is now responsible for hardware/software design for all future Tolino branded e-readers.

In an exclusive interview with Good e-Reader, Kobo Rakuten CEO Michael Tamblyn explained the process “Often, there isn’t a purchase involved at all. In many cases, we are helping them out as they reach the end of their runway. Most companies that started out between 2009-2014 have run into one of a number of walls related to scaling – they couldn’t capture enough share to make publishers interested, couldn’t get big enough to keep investors interested, tried out a business model that didn’t work, couldn’t raise cash after VCs moved on from ebooks to the next shiny thing, or their parent company didn’t see a path to profitability and decided to wind down. Whatever the reason, Kobo’s focus is making sure that people who bought ebooks can keep their libraries intact and continue on with us as happy customers. It’s so gratifying to get messages from these newly-migrated customers who are so relieved that their books aren’t going away, who get to upgrade to newer, better ereaders, who were stuck on apps that hadn’t been updated in years and now get to see how mobile reading has jumped forward. And the companies who are working with us are happy too. Instead of angry customers wondering where their books went, readers and their libraries are taken care of. It isn’t always easy, but we do our very best to make it a soft landing for everyone.

I think Barnes and Noble is going to sell the Nook brand to Kobo. Kobo will then take the millions of Nook customers and transfer them into their own ecosystem. Kobo will then sell their own e-readers in over 600 B&N bookstores in the United States.  Barnes and Noble could finally wash their hands of technology and still make money through the sales of hardware. Customers in the states could buy a Kobo from the BN.COM website or play around with one in a store, before they make a buying decision.

For years B&N investors have been begging the company to get rid of the Nook, which is a literal black hole of revenue. Nook has lost over $1.6 billion dollars in revenue since 2009 and every quarter they continue to experience losses.  There is no silver lining to the Nook, no CEO is going to save it and bring it back to its former glory. Barnes and Noble does not have the company culture to focus on digital, they are a traditional bookseller. The final nail in the coffin is the founder of the company saying they are basically abandoning ebooks and e-readers and tablets.