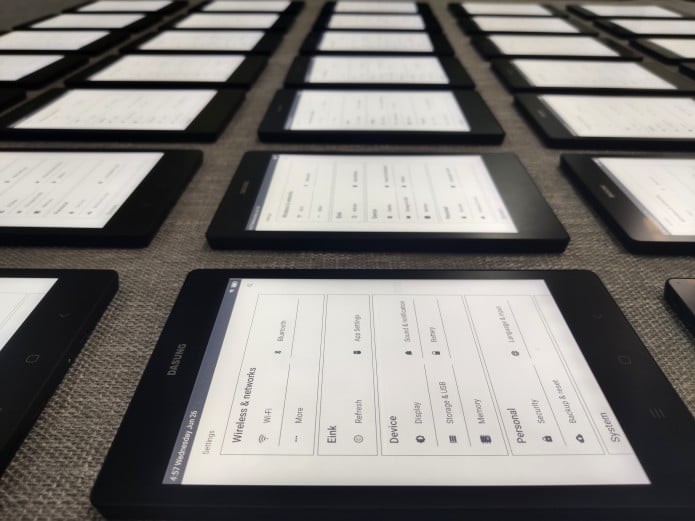 Dasung is a Chinese company that specializes in E Ink Monitors and they released a crowdfunding campaign last year for their Not an e-reader. They raised around $252,000 CAD on their Indiegogo campaign and they have not posted anything in over two months and only shipped a few units to early customers. The campaign has stopped accepting new perks, which means nobody can place an order, they can only donate. None of the official Dasung distributors in North America or Europe even have a prototype and they all think it might be vaporware. It looks like Dasung has run out of money and this product will likely never be released.

The new Dasung product features a 7.8  E-ink Screen Carta HD display with 300 PPI. It has a front-lit display so users can read in the dark and also has a color temperature system for cold and warm light. It is designed to be an e-reader, secondary monitor and an extension of your iPhone or Android device.

Underneath the hood is a Quad Core Processor, 2GB of RAM and 64GB of internal storage. It has Bluetooth, Wifi, 5-point touch, 2-channel stereo. You will be able to listen to music via the 3.5mm headphone jack. There is an HDMI port so it may be plugged into a PC or laptop to act as a secondary monitor. This device has its own power supply, which is a first for Dasung and it is 5300 mAh.

It remains to be seen if this product will be shipped out to most customers who placed an order. The only video that exists for it, was an unboxing by a user who reached out to Good e-Reader and lamented about the lack of support from Dasung.