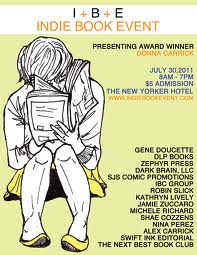 As part of the new series on event opportunities for our readers, GoodEReader.com will be covering events in the technology sector, as well as the digital publishing conferences. This month, the Indie Book Event, presented by GUD Magazine and Five Star Publications, will take place at The New Yorker Hotel in Manhattan on July 30th.

Two panels will be conducted by the Indie Book Collective and feature its three founders, Carolyn McCray, Amber Scott, and Rachel Thompson. All three founders have authored and self-published several books between them and have also co-written a book on the self-publishing industry, Dollars and Sense: The Definitive Guide to Self-Publishing. The IBC will be offering two presentations, one on author branding and social media and the other on ebook publishing.

IBC has made a name for itself among indie authors and those who watch the self-publishing sector due in large part to its staged author promotional events throughout the year. GoodEReader.com wrote on their recent Memorial Day Blog Tour de Force event, the Tour de Troops, in which self-published authors gave their ebooks away to all commenters during the four day event, as well as gave additional copies of their ebooks to U.S. troops stationed abroad for every comment left on their respective sites throughout the event.

This week, in conjunction with their appearance at the Indie Book Event, the IBC will be hosting another blog tour of twelve authors, the Menage a Blog, which begins on July 18th with Amber Scott’s Fierce Dawn, Carolyn McCray’s The 7 Folds of Winter, and Deena Remiel’s Brethren Beginnings Volume One. Day two pits Lacey Weatherford’s The Trouble with Spells against Terri Giuliano Long’s In Leah’s Wake and the IBC’s own Dollars and Sense. On days three and four of the event, Jackie Chanel’s untitled work, Tracking Shadows by Regan Black, and Judith Gaines’ Perfect Copy compete, while Falling Into Winter by Eden Baylee, Theresa Ragan’s Finding Kate Huntley, and Jacquie Rogers’ Much Ado About Marshals wrap up the tour.

Each day of the event, three authors per day will be giving away free digital copies of their works to all commenters. At the end of the four-day event, the authors with the most daily comments will compete in a final show down and an overall victor declared; previous Blog Tour de Force winners have included Ann Charles of Deadwood fame. As a final incentive, all commenters will be entered into a drawing for a new Kindle to store all of the free daily ebooks.