You are here: Home / e-Reader News / The Pocketbook A7 Android Tablet Is Available Soon 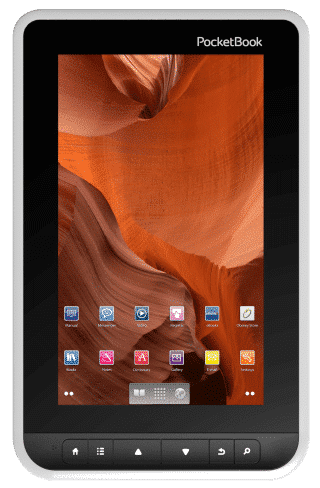 Pocketbook has just released its next generation Android Tablet, which is a followup to the original IQ. This new device features the same 7 inch screen that you see in the Kindle Fire, Nook Tablet, and Kobo Vox.

The new Pocketbook A7 features a 7 inch TFT capacitive touchscreen display with a resolution of 1024×600 pixels. The CPU is rather lackluster with a single-core 1 GHZ processor with 512 MB of RAM. It comes with 4 GB of internal storage and you can upgrade it via the MicroSD up to 32 GB.

Obviously, with most lower-end tablets, you are not going to get HDMI or anything like that. Instead you have a Micro USB connection to facilitate data transfers between your PC and the tablet. It also has a speaker, 2 MP front facing webcam, and microphone. Battery life should garner you around 6.5 hours of work with mixed, full-load actions (active Wi-Fi, web surfing, reading, listening to audio, watching video).

This is being mainly billed as an e-reader. Like most Pocketbook products, it has full compatibility with Adobe Digital Editions with PDF and EPUB. This allows you to shop with other stores that sell books in EPUB format, which is most books, and transfer them easily to your tablet. It currently reads EPUB (ADOBE DRM), PDF (ADOBE DRM), EPUB, PDF, FB2, TXT, DJVU, RTF, HTML, DOC, DOCX, JPEG, BMP, PNG, MP3, WAV, AVI, MKV, MP4.

There are a number of free and open sourced applications that come on this Android 2.3 device, such as Dolphin HD and Cool-Reader. It has no official access to the Google Android Market, and if you want apps to load on it, check out our Good e-Reader Android App Store. Finally, there is no news on the release date or price, but you can expect to buy it for under $200.00.