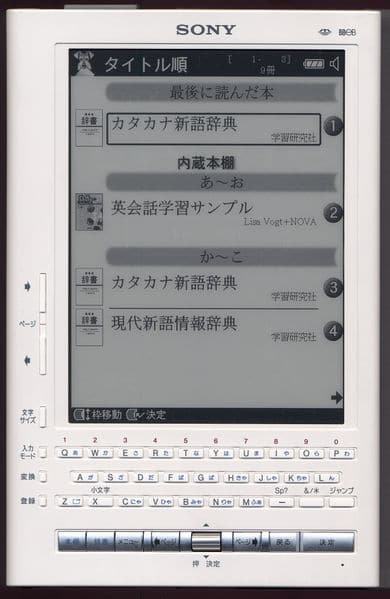 The very first e-reader that was ever released with an E INK screen was the Sony Librie EBR 1000 in 2004. It was only sold in Japan, and retailed for ¥41,790, which was around $260 USD. The Sony had a full QWERTY keyboard with physical page turn buttons on the left side, this was a conscious design decision, because Japanese books flip from the left side, instead of the right and the overall color scheme was was white. Initially many users were impressed with the display, that had better resolution than most computers. .

The Sony Libre EBR 1000 featured the first E INK display with a resolution of 800×600 with 167 PPI. It only had 4 grey scales, black and white, instead of the 16 grey scales we have today. It did not have a lighting system and was totally dependant on environmental light to see what was on the screen. There is a tiny qwerty keyboard at the bottom of the display, permitting a limited form of marginalia, as well as a small roller wheel. Two physical page turn keys were on the left side.

It was powered by a ARM-based Motorola DragonBall MX1 chip (with a ARM920T core) and had 10MB of internal storage and a Memory Stick slot. There was a USB2 port, a headphone jack and mono speaker. It was powered by 4 AAA alkaline batteries. At power-up, the Librie presents the ubiquitous Japanese cartoon character to guide you through the electronic library. The mascot is called Libro, based on the designers three-year-old miniature Schnauzer. The dimensions were 126mm×190mm×13mm and weighed 190g. This is the same weight as a typical book in Japan. The OS that Sony created was based on Linux.

Sony had an ebook format that was raring to go. They named it Broad Band eBook (BBeB) and one of the important aspects was to to shrink the text of a 250-page book into 500 kb of text, saving precious storage. The primary BBeB content provider is Publishing Link, a joint venture between Sony and a number of large Japanese publishers and printers. Using the digital rights management functions of BBeB and the Librie, content from Publishing Link is set to expire and be unreadable after 60 days. Ebooks sold for ¥1,200 ($8.30) and Readers can choose texts from seven sections, or clubs, ranging from business books to novels and may either pay ¥315 ($3.00) for a single title or join that club and gain access to up to five books a month for ¥210 (£2.10) each. The e-reader could not buy books right on the device, because it did not have WIFI. Books must be downloaded to a PC, then transferred to the reader via its USB 2.0 port or by using a Memory Stick. The Librie comes preloaded with three Japanese dictionaries in Rom and an encyclopaedia.

The final release of the was the result of three years of work on the part of Toppan Printing, Philips, Sony and E Ink Corporation, this was basically the first e-reader, that used an E INK display, a company nobody heard of before.

In 1996 the MIT Media Lab developed new e-paper technology that developed tiny microcapsules that were suspended in a liquid that is encased within a film layer. The microcapsules, which are roughly the width of a human hair, contain positively charged white particles and negatively charged black particles. Applying a negative electrical field causes the white particles to rise to the surface. Conversely, applying a positive electrical field causes the black particles to rise to the surface. By applying different fields at different parts of a screen, e-ink produces a monochromatic text display. One of the great aspects about this tech was that it only drew power when the state changed on the screen. In 1997, the tech was so promising that they started a business and called it E INK. The rights to the technology are currently owned by the Massachusetts-based E Ink Corporation, which was acquired by Taiwanese company Prime View International in 2009.