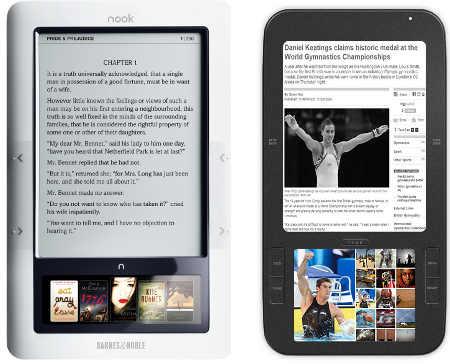 The Spring Design Alex e-reader, oh what could have been? The companies main claim to fame was it predated the Barnes and Noble Nook and looked almost identically the same. So much so in fact, that Spring Design sued Barnes and Noble for infringing on its intellectual property for the design.This court case is actually still pending and hurt the small start-up company from promoting its product properly.

Spring Design had the original dual screen e-reader concept where the top half was e-ink and the bottom screen was full color touch screen. They had actually met with Barnes and Noble before either company had begun to develop their e-reader on a collaboration effort in cross marketing this new kind of device. Nothing was signed in writing, but Spring Design was visibly upset about B&N using the tech they talked about.

The Spring Design Alex came onto the market a few months later after the Nook 3G which at the time cost $259 and Alex sold for $399. Although Spring Design did lower its price last year to $349 the price was too much for most people to comfortably afford. The price was the main hurdle for people to choose between both devices, and having a the nations largest bookstore behind you, fostered the Nook’s tremendous growth.

The eBook Reader Blog had mentioned that they stopped by the Spring Design website which had no updates since November 2010. The product also said out of stock. When they had emailed the company and got this response; “Thank you for your interest in Alex. Spring Design is phasing out the current Alex Reader within the next 6 months. We have not announced the product change and introduce any new product yet.”

So either Spring Design is working on a sequel to its e-reader or had the money pulled from their investors. Whatever the case it looks like the current iteration of their e-reader is officially over. If you fancy yourself a laugh, check out the Spring Design Alex duke it out with the Asus DR-950.