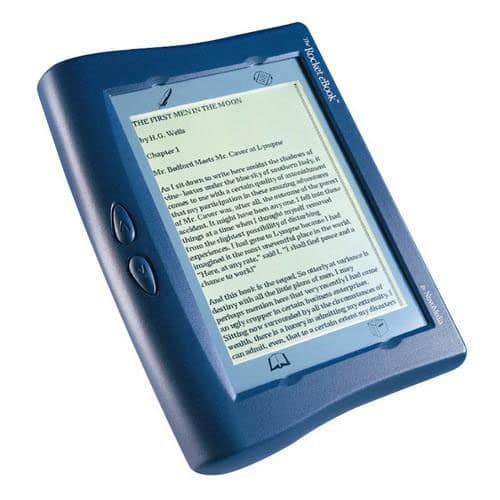 Martin Eberhard and Marc Tarpenning created the very first e-reader in 1997, the Rocketbook. They were lifelong voracious readers and saw a future where everyone was reading digital books. A prototype was quickly developed and pitched to Jeff Bezos at Amazon, but they took a pass because the device needed to be plugged into a computer to download books. A few days later they took a meeting with Barnes and Noble and a deal was closed within a week, the bookseller owned 50% of the company. In the first year, 20,000 Rocketbook e-readers were sold. A few years later the e-reader was discontinued, this is the story of the first e-reader.

In 1997 the tech world was a very different place. The Palm Pilot reigned supreme and Blackberry hadn’t even released a phone yet. People had been reading PDF files and various other kinds of ebooks on their computers for years, but there was no handheld ebook reader on the market. This prompted Eberhard and Tarpenning to form a new company called NuvoMedia and try and get some investment capital to make something happen. Since even E-Ink wasn’t around yet, they had to use transflective LCD screen. The device weighed a little over a pound, heavy by today’s standards, but it could be held with one hand, like a paperback book, and its battery lasted twenty hours with the backlight on, which compares favorably to today’s mobile devices.

In the book by Brad Stone, the Everything Store, he talks about the following “In late 1997, the NuvoMedia founders and their lawyer took a Rocketbook prototype to Seattle and spent three weeks in negotiations with Bezos and his top executives. Bezos “was really intrigued by our device,” Eberhard says. “He understood that the display technology was finally good enough.”

Bezos seemed impressed but had some reservations. To download books, a customer needed to plug the e-reader into his computer. “We talked about wireless but it was crazily expensive at the time,” says Eberhard. “It would add an extra four hundred dollars to each unit and the data plans were insane.” The Rocketbook’s display wasn’t as easy on the eyes as modern e-readers, but Eberhard had checked out
low-powered, low-glare alternatives, like E Ink, being developed in the MIT Media Lab, and e-paper, from Xerox, and found the technology was still unreliable and expensive.

After three weeks of intense negotiations, the companies hit a major roadblock. Bezos told Eberhard he was concerned that by backing NuvoMedia and helping it succeed, he might be creating an opportunity for Barnes & Noble to swoop in and buy the startup later. So he demanded exclusivity provisions in any contract between the companies and wanted veto power over future investors. “If we made a bet on the
future of reading, we’d want to help it succeed by introducing it to our customers in a big way,” says David Risher, Amazon’s former senior vice president of U.S. retail, who participated in the negotiations. “But the only way that’d have made sense is if it had been exclusive to us. Otherwise, we’d have been funneling our customers to a potential rival.”

Eberhard couldn’t bring himself to agree to limit his future fundraising opportunities, so Bezos’s concerns became a self-fulfilling prophecy. Once it was evident that the companies were at an impasse, Eberhard and Tarpenning got on a plane and flew to New York to meet with Len and Stephen Riggio of Barnes & Noble. They shook hands on a deal within the week. The bookseller and the publishing giant
Bertelsmann agreed to invest two million dollars each, and together they owned nearly half of NuvoMedia. In the first year 20,000 units were sold and in 1999, Cisco invested in NuvoMedia, giving the company more credibility and another strategic ally.

The e-reader business at this time period was unsustainable. Major publishers had not yet started digitizing their their front-list or backlist tiles in a meaningful way and the dotcom bubble of the 2000’s was rearing its ugly head. NuvoMedia could not raise more capital to work on a second generation model and In February 2000 NuvoMedia was sold to a Burbank-based interactive TV-guide firm called Gemstar in a stock transaction worth about $187 million. Gemstar primarily bought the company for their patent portfolio. A few months after the sale, Eberhard and Tarpenning exited the firm in disappointment. Gemstar released a successor to the Rocketbook, but after slow salest they officially pulled the plug in 2003.

The Rocketbook debacle jaded Barnes and Noble who stopped selling ebooks altogether, although they jumped back into the fray almost a decade later. Eberhard did not stop his enterpetial spirit and later co-founded Tesla.

Rocketbook has the distinction of being the first e-reader, but around the same time other companies jumped into the fray. This includes Other ebook readers were launched in 1999, for example the EveryBook Reader, launched by EveryBook, and the Millennium eBook, launched by Librius.

The EveryBook Reader was “a living library in a single book”, with a “hidden” modem to dial into the EveryBook Store, for people “to browse, purchase, and receive full text books, magazines, and sheet music”. The Millennium eBook was a “small low-cost” ebook reader launched by Librius, a “full service e-commerce company”. On the company website, a World Bookstore “delivered digital copies of thousands of books” via the internet. All these ebook readers didn’t last long. In 2001 Bookeen released the Cybook, and is the only e-reader from this time period who is still in business.