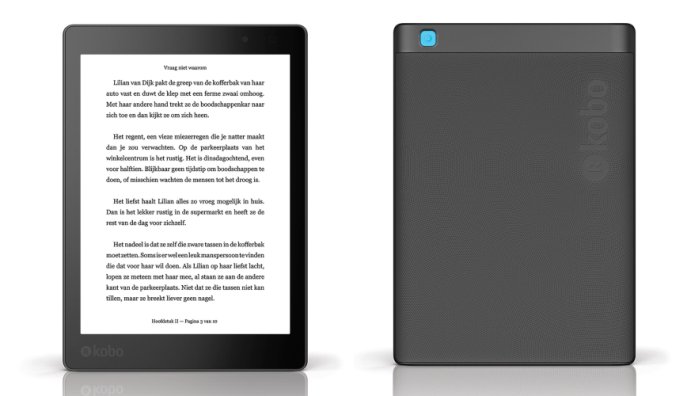 One of the ways Kobo has become the second most popular e-reader brand in the world is due to the sheer amount of retail and bookstore partners they have. Whenever the Canadian company has a new device coming out, someone inevitability drops the ball and posts the full specs early. A Dutch retailer has just posted everything we want to know about the brand new Kobo Aura One.

The Kobo Aura One features a 7.8 E-Ink Carta 2 display with a resolution of 1872 x 1404 and 300 PPI. It has the same pixel density as other flagship e-readers on the market, such as the Kindle Oasis. I like the fact the new Kobo screen is flush with the bezel, instead of being sunken. Why is a flush screen important? Normally when an e-reader has a front-lit display the LED lights tend to bleed less, giving the user a better experience.

Underneath the hood is a 1 GHZ processor, 512 MB of RAM and 8 GB of internal storage. There is no mention of an SD card to expand the memory further, but lately Kobo has been employing an internal SD card on the circuit board that powers the operating system.

The e-reader is waterproof, so this is the second model that you will be able to read anywhere. The first e-reader to be waterproof by Kobo was the H20, which came out in 2014.

There is no official word on pricing for Canadian and US residents, but the Aura One will be available in Europe for 229 Euros.

In the next few days we will be posting a full hands on review of the Aura One, so stay tuned.