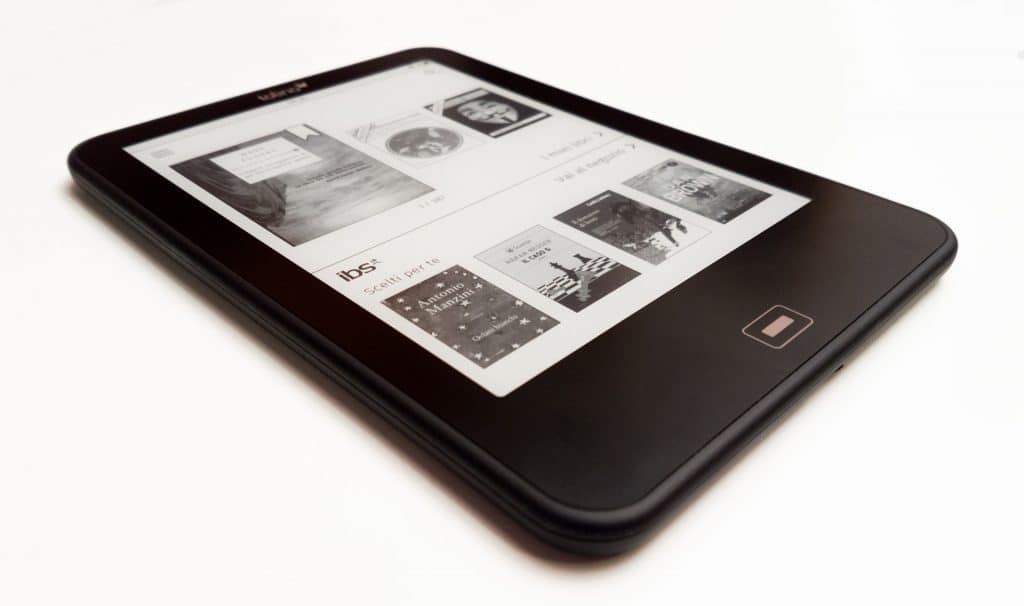 The Tolino Vision 4 HD is the best e-reader to come out of Europe, ever. It takes the best elements of the Amazon Kindle Voyage and the Kobo Aura H2O Edition 2 and gives users a solid experience. The Tolino is waterproof/dustproof, has the same RGB front-lit system as Kobo and the screen is completely flush with the bezel. 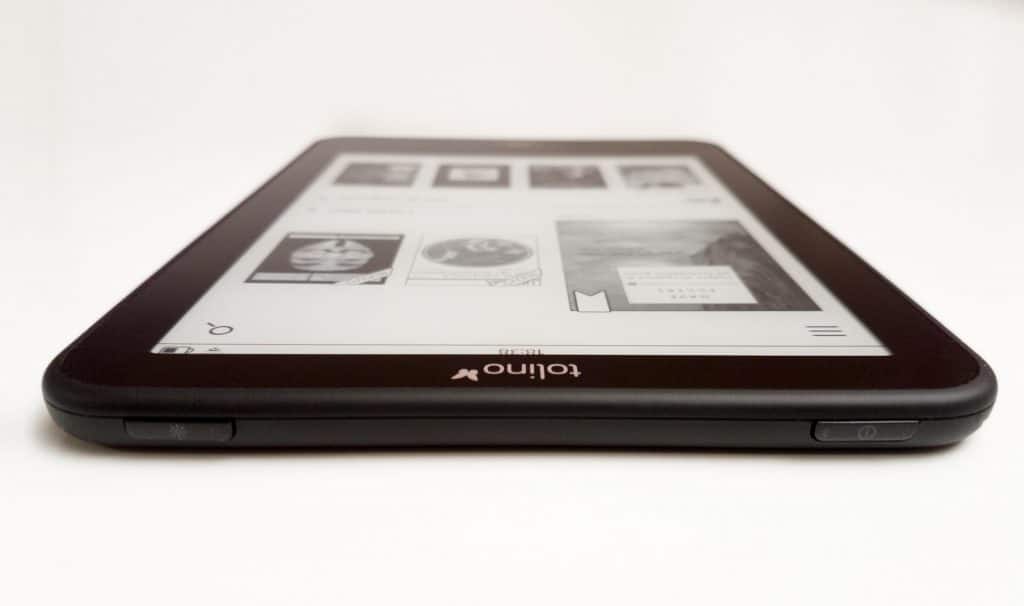 The Vision 4 HD features a six inch E Ink Carta display with a resolution of 1448X1072 and 300 PPI. The screen is completely flush with the bezel, which makes interacting with the touchscreen a joy to use. This is the second model in the world to feature a different lighting system, which is comparable to the Kobo Aura One. Tolino bills it as a “Color Temperature Light” and although it is not as advanced as the Kobo model, people seem attracted to this feature for reading a night.  It is also waterproof and dustproof.

Underneath the hood is a Freescale IMX6 single core 1GHZ processor, 512MB of RAM and 8GB of internal storage. There is no SD card to expand the memory further, but it does have 5GB of Tolino Cloud Storage. You should get around two weeks of usage with the 1500 mAh battery.

The Tolino Vision 4 HD has a feature called Tap to Flip. The entire rear panel reacts to the fingertips and can be used to turn the pages of an e-book or navigate around the e-reader.  There is a vibration sensor can be turned off in the settings menu.

There is a capacitive touchscreen button on the front of the screen that brings you back to the main menu when you press it down. There is a settings page on the top left hand side that allows you to access WIFI, firmware updates and an Adobe setup area, where you can enter your login and password so you can sideload in library books or ebooks you purchased from other retailers. 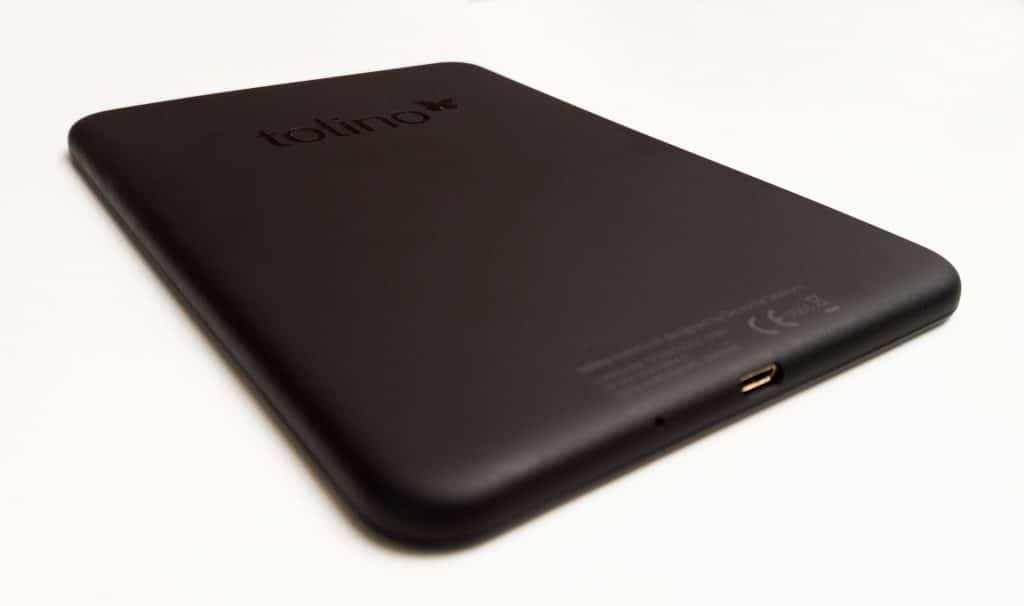 The UI of this device is very clean and does not have slew of features that will confuse new users. The home screen includes your library, with the last three e-books you have opened. There is also a small carousel at the bottom of the screen that showcase new and notable titles from the Tolino bookstore.

You can set this device in many different languages, including English, French, Spanish, Italian, Dutch, and German. Whatever language you employ will totally change the menu options and the entire user interface.

There is an internet browser and the navigation experience is really solid. Many websites these days are optimized for mobile, which is a boon for e-readers. 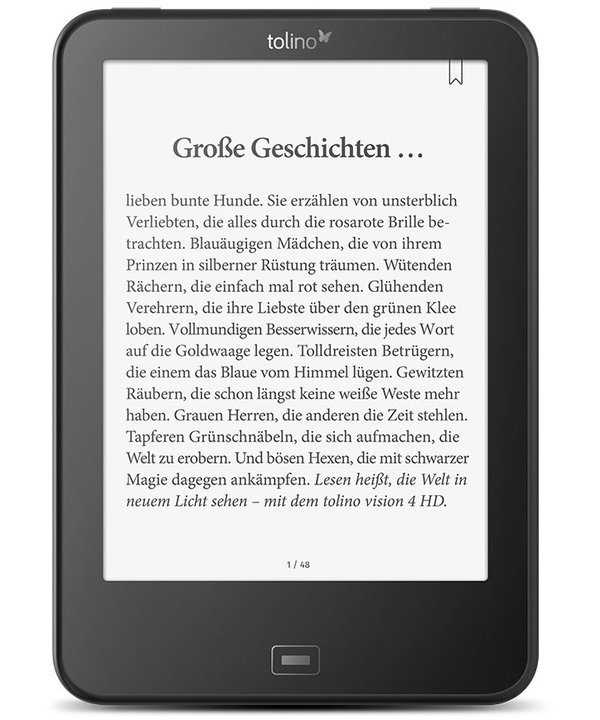 This e-reader is sold in Germany, Belgium and a number of other countries. Our review unit was bundled with the Hugendubel bookstore, but this is not the only one you are stuck with. There is a new feature on the Vision 4 HD called Library Link. You can link your existing account with retailers such as Thalia, Orell Fussli, Weltbild, IndieBook, Buch, Libris and many others. Once your accounts are linked, you can import in all of the e-books you bought from that specific retailer and they will be available to read in your device’s library.  This is the first e-reader in the world that plays nice with all of the German booksellers.

The overall reading experience is very solid. Changing the fonts, font size and alignment is very similar to the experience that Amazon provides. You have Bitter, Fira Sans, Source Sans, Publishers Font, Droid Serif, OpenDyslexic and Vollkorn as the stock fonts.  There are three different settings to augment the line spacing, alignment and margins.

There are many dictionaries that allow you to lookup a specific word or you can install a translation dictionary. There are dozens to choose from, such as German to French, German to English, English to French and so on.

The E Ink Carta screen makes page turns super fast and responsive. You can tap on the page to turn, swipe/gesture or use the Tap to Flip feature that is on the bottom of the e-reader.

The RGB lighting system is not as refined as the Kobo. In a side by side comparison during our review video you can really use how muted the colors on the Tolino, while the Kobo is bright and vibrant. If you are not using the RGB color mode, the default front-lit display is on par with Amazon and Kobo.

The Tolino brand is doing everything right, which is why Kobo acquired them. When I conducted an exclusive interview with CEO Michael Tamblyn, he dropped a bombshell. “Kobo has taken over the manufacturing of Tolino devices, which will continue to be sold by alliance retailers under the Tolino brand. In German-speaking markets, Kobo will shift its focus from selling Kobo devices to concentrating on supporting Tolino in those markets. What’s exciting is starting to work together on new devices that can continue the great success that Tolino has had in German-speaking markets combined with some of the device innovation that has made Kobo a leader in pushing forward eReader design.”

The Tolino Vision 4 HD is a tour de force. It offers a myriad of features not found on other e-readers and the company has not been afraid to innovate and try different things.

My Library is fairly basic, no advanced sorting features
Primarily only marketed to a German audience, hard to buy internationally
Nice attempt on RGB lighting system, but fails to execute properly