You are here: Home / e-Reader News / eBooks vs. Web Apps for Interactive Content 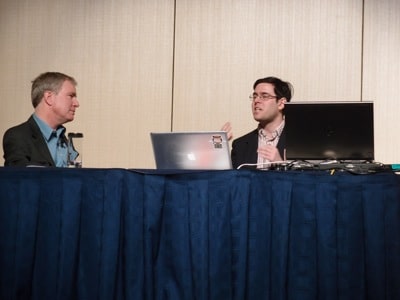 Bill McCoy of the IDPF and Sanders Kleinfeld of O’Reilly discussed whether web apps or an ebook format was better for publishers.  McCoy pointed out that publishers needed to scale and they were in the business of making multiple titles.  Because of this they need tools that will scale with the enterprise.  On the whole, he said, design and content are best handled by designers and authors and not by programmers.  Programmers should be used to develop tools and it doesn’t scale to hire a lot of programmers to develop web apps for multiple projects.  Further, he said that HTML 5 is capable of developing ebooks, websites, and apps and this leads to a a consistency across titles. Companies should not think of building each title as a piece of software.

Kleinfeld felt that apps are the future of digital publishing. e-Readers don’t support a lot of the things that can be done with HTML5. By doing a web app, one can avoid the compatibility problems that the readers present. Web apps are useful because they are online and can be social and the way they are developed makes sharing and discovery very easy.  Web apps can be done now and don’t have to wait for various e-readers to catch up. eBooks are software and whether you like it or not if you do ebooks you are a software developer.

Both agree that dedicated ereaders are on the way out and will be replaced by phones and tablets.