You are here: Home / e-Reader News / The Elusive “Netfix of eBooks” 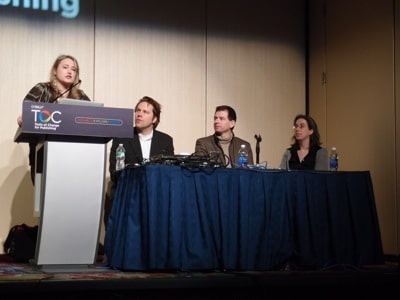 All three said there is a definite market for a “Netflix” of books and consumers are more than willing to pay for the ability to rent a book online.  Skoobe’s customers start at age 30 and go to age 88.  Skoobe has found that people will buy in parallel.  They will buy the hardcover for use at home and then rent a version to read on their phone while they commute.  18% of their customers tried the book on Skoobe and then bought the book and 11% will buy the ebook even though they have the ability to read it on Skoobe. Users tell them that they usually read more after they become a subscriber and they take their reading time from watching tv and sleeping.

24Symbols reported that about 45% of their subscribers read their books directly on the web and the next largest number use the iPad. Both agreed that DRM is not an issue with their readers, but it is with the publishers, because the readers don’t own the books and so aren’t concerned about it.  Safari Online does not use DRM, but this is not an issue because all of their content is streaming.  A bigger issue for them is people sharing their accounts with others and they monitor this.  However, this type of abuse has dropped considerably.  All parties do not share individual reading data with publishers, but they do provide aggregated data. In terms of privacy, 24Symbols said that they started with a login through Facebook, but people strongly objected to this and they had to provide an alternate login method.

Both 24Symbols and Skoobe said that they wished publishers were willing to experiment more and be more willing to try out new methods of distribution and sales.  24Symbols pointed out the the subscription model worked well because if the customers like the service they tend to forget about how much it is costing them and this takes pricing out of the equation.  In one interesting question from the floor an author who has one of her books listed at one of the services mentioned that she gets $6-8K/month on royalties from her book, but only pennies from the service.  It was pointed out that royalties are completely between the author and the publisher and the subscription service has no control over this.  Also, the European services are quite new and they are expecting to grow in the future.