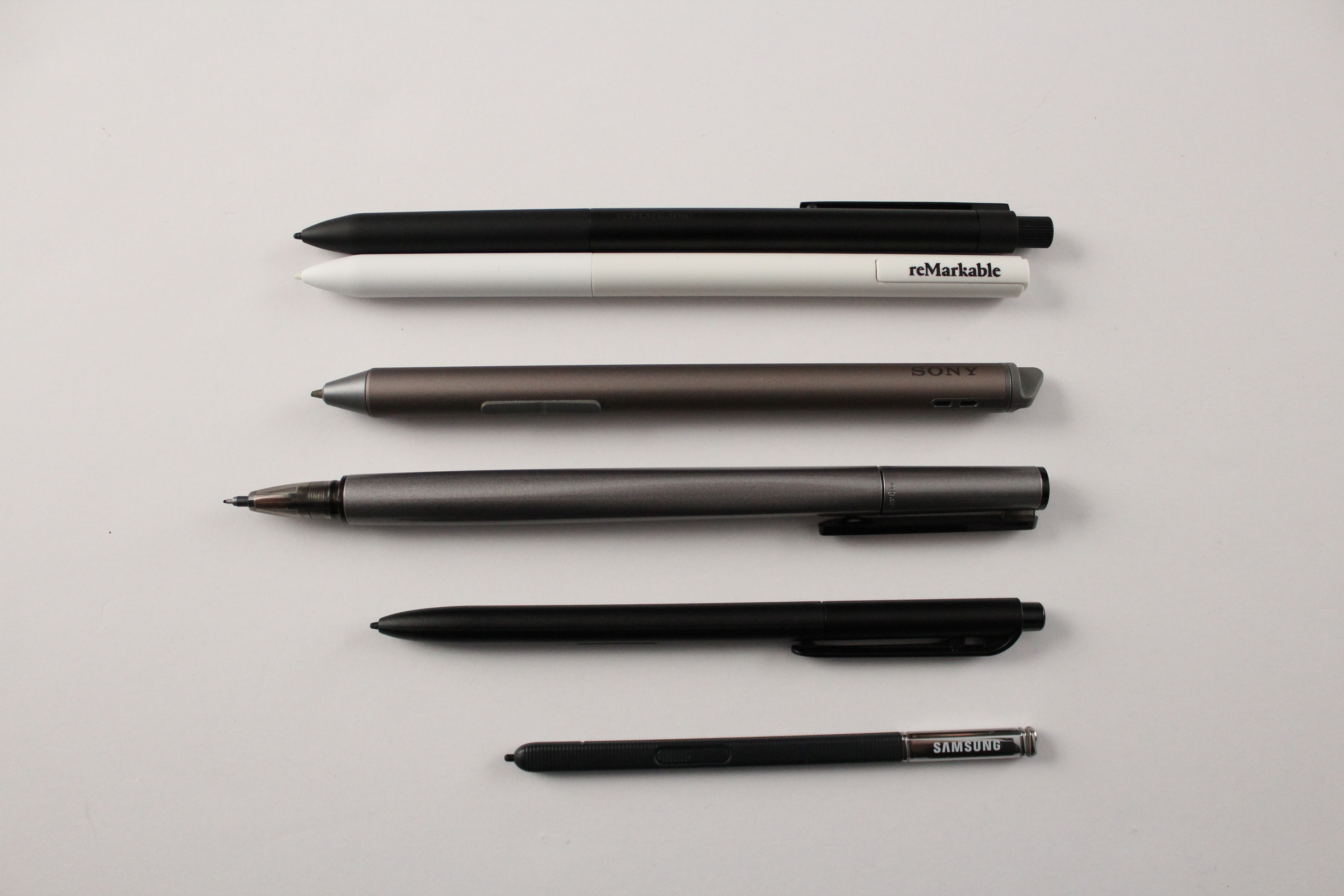 The Samsung Galaxy Note stylus is compatible with glass and e-paper screens that the plastic styli are compatible with. Many vendors who ship a stylus with the purchase of an e-reader do not made it easy to buy a backup stylus or replace a lost one. The Samsung Note series of stylus are often very affordable on Amazon and only cost less than $10 and it weighs 3g. This is the worst of the bunch, latency is very high and drawing experience sucks.

Plastic Stylus – The plastic stylus is included with purchase of your Boyue Likebook, Onyx, Wisky EE Writepad, Mobiscribe and Xiaomi Moan. These stylus sometimes have a different design, some have an eraser on the top, others have buttons on the side to erase or highlight. The plastic nib normally never needs replacing. The average stylus weighs about 8 g.

The Sony stylus is made of aluminum and the nib is made of graphite. The stylus is self-powered and has an internal 1,000 mAh battery. You need to take the top off and it reveals a charging port, simply plug it into your MAC, PC or laptop and it will charge. The graphite nibs on the stylus are replaceable, with the purchase of the Sony Digital Paper you get around a dozen. There is also a bunch of different types of nibs that you can buy, one  is made of felt and the other is POM, which is like a regular pen tip.  If you lose your stylus, you can purchase  stylus replacement for around $79 from Amazon. The stylus weighs 16 g.

The Supernote A6 and A5 use a stylus that is made of metal and a little bit of plastic in their ballpoint pens. You can click down on the top of the stylus and the nib retracts, this is really useful if you are traveling and don’t want then nib to scratch anything that is in your case, purse, messenger bag or whatever you use to transport your device. The pen is 0.7mm weighs 24g and it is wear-resistant and the nibs are not replaceable. The pen was developed in conjunction with WACOM and it is dubbed the Shinonome Pen.

The SuperNote A6 screen has a layer of plastic that covers not only the screen, but the entire device. The company wanted to do this, because the stylus interacts with the screen better. When you are pressing down and jotting a note or freehand drawing, you get some torque. This is exactly like using a normal pen and drawing on a sheet of paper. The SuperNote is using a glass screen, and the plastic that covers it gives you an unique experience, it really doesn’t feel like you are writing on a slab of glass.

Remarkable has a plastic stylus and graphite nibs that come with the purchase of a Remarkable writing slate. The company has just released a new stylus, that is the best one currently available. The new stylus is called the Marker Signature. It is a high quality stylus that is made of aluminum and anodized for a matte black finish.  There is a clicker on the top of it, which doesn’t do anything other than an provide an avenue to collect your thoughts while drawing or editing PDF files.  The top of the pen can be unscrewed and there are three replacement nibs, while the stock Remarkable Pen only has one.

The Remarkable Marker Signature is heavier than almost every other stylus on the market. It weighs 18g, and the only other pens that are heavier is the SuperNote Pen. The stock Remarkable Pen is made of plastic and only weighs 12g. Both the new Marker Signature and the stock Remarkable pen use graphite nibs, so they wear down pretty quickly if you tend to press hard, while drawing. I have found that graphite nibs are better than stylus with a plastic nib. This is because a graphite nib allows you to shade better, while having the stylus at an angle, this is due to the tilt sensitivity, which is similar to pressure sensitivity.

Most of the time there is little focus on the stylus. This little piece of technology gets lost in the shuffle when considering to buy a digital note taking device for the first time or upgrading for an older model to a new one. Many people who buy these devices want to draw, write or edit PDF files. A stylus plays a critical role in this experience. I found the Remarkable Marker Signature and SuperPen offer the best experience. The stylus have a hefty weight to them, which makes drawing easier and the stylus does not feel cheap.

I believe companies involved in the digital note taking field need to develop a premium stylus that people can spend extra on. I found that very light stylus made of plastic with plastic nibs do not provide the best drawing experience. Graphite nibs and an aluminum design provide the best experience.