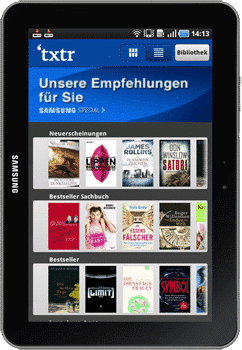 Txtr is expanding their reach into other European markets with their new ebook apps in the Samsung App Store. Starting today, users in Germany, Austria, Switzerland, United Kingdom, France, Italy, Spain, and Poland can download the Txtr App. Other European countries will follow over the next months, alongside tailored promotion campaigns, jointly executed by Samsung, txtr, and local publishers.

Txtr is a German based company who is one of the largest ebook stores focusing on the local market. They have a great app available on iOS and other platforms. The app allows you to read, buy, and discuss books with other users.

The new app will allow you to buy books in all of the different languages that it supports in their foreign expansion. You can get local and bestselling authors at the click of a button. The app is different in each market and is available on most Samsung Android phones and tablets. So if you have the new Galaxy S2 or any of the Galaxy Tab line of devices, you are good to go.

“This enlarges the txtr reach tremendously, since Samsung is the market leader in Android-based devices. We are already leaders in Germany – not only do we have the largest German language catalogue of more than 52.000 commercial titles, the download figures confirm that an eReading app is a core service for device makers. Over the last year we have been investing in building our local-language catalogues and our recent successes show that this is the right strategy,” says Christophe Maire, CEO of txtr.