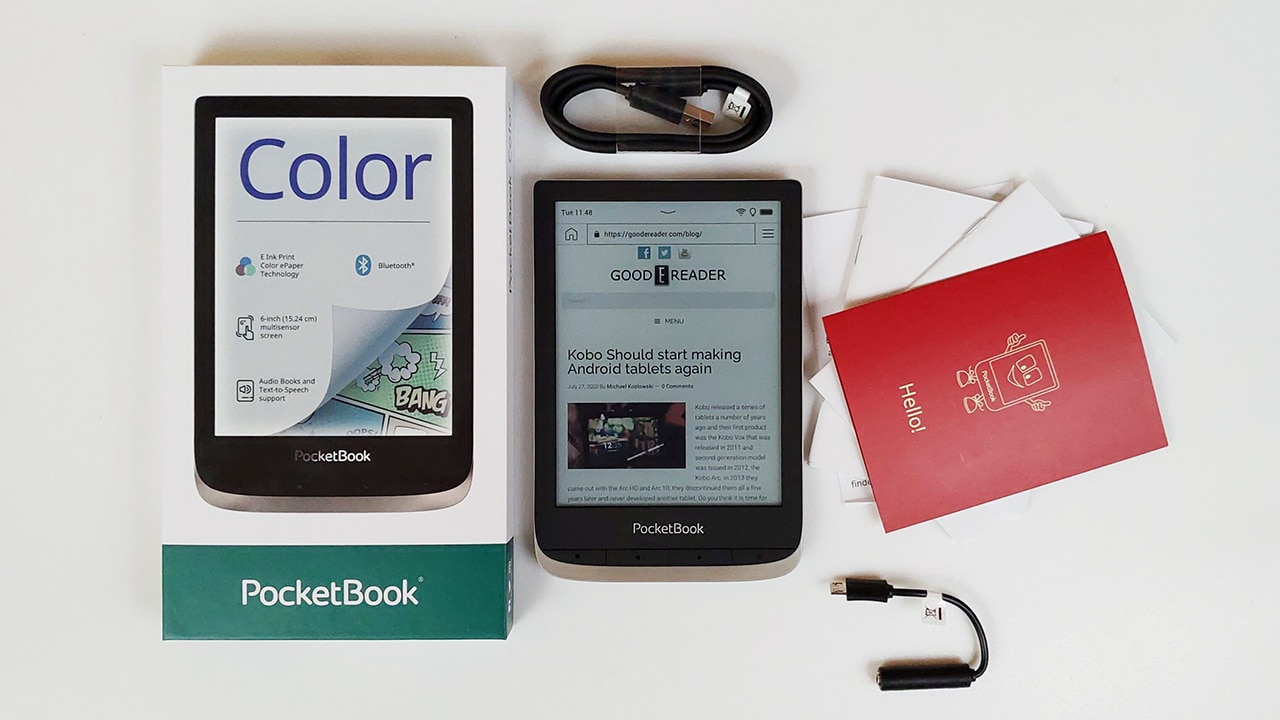 The Pocketbook Color is the first English e-reader that is employing the new E Ink Kaleido, which can display 4,000 colors and also show B&W text at 300 PPI. This is one of the most eagerly anticipated devices of 2020 and should prove whether or not there is a future in color e-readers.

The Pocketbook Color has a 6 inch capacitive touchscreen display with a resolution of 1072 × 1448 with 300 PPI. It has a front-lit display with a fair number of white LED lights, but does not have a color temperature system with amber LED lights, this is because the colors would look too weird.

Underneath the hood is a Dual Core 1GZ processor, 1GB of RAM and 16GB of internal storage. You can further increase it via the SD card, up to an additional 32GB of storage. It has a Micro USB port to charge your device, it also comes with a Micro USB to 3.5mm headphone jack to listen to music or audiobooks, or just read your ebooks aloud via TTS. It also has Bluetooth for wireless headphones and is powered by a respectable 1900 mAh battery.

The retail packing for the Pocketbook Color is well designed and eye catching. There is a large image of the e-reader with a number of key features on the screen. The Pocketbook Logo is on the bottom, with a green background color with white text. Inside the box is the e-reader encases in a static proof bag and underneath that is the USB cable, Micro USB to 3.5mm headphone jack and warranty, user guide and quick start guide.

The industrial design of the e-reader has a black body that is accented with gunmetal trim on the sides and back. On the front are two physical page turn buttons, a main button and more button. It is nice to see a modern day ereader with buttons, most just rely exclusively on touchscreen interactions. The back is gunmetal silver too. There is nothing at the very top or the sides, instead everything is at the very bottom of the device, such as USB, SD card and power button.

Let’s talk about the color E INK screen. Since it is using a sunken bezel, with no layer of glass or a screen protector, this is the best color experience we have ever seen. It is better than the Hisense phones, primarily because they are using glass based displays with a screen protector, there is so much getting in the way, that colors can be muted. It is also better than the iReader C6, because this model is using hexagonal pixels, instead of the square pixels the Pocketbook is employing. iReader is also using blue and white LED lights, so the screen can have a blue hue. Pocketbook is only using white LED lights, so the screen is bright and vibrant.

One of the other compelling things about this e-reader is a new paint app. It has the ability for users to select colors from a color palette, and select various brushes and pencils to draw with. You will get the most value out of this by buying a capacitive stylus. It is astounding that Pocketbook has this level of sophistication in their note taking app. This might be the future of e-notes.

This device retails for $219 and is available from the Good e-Reader Store, an authorized Pocketbook dealer.