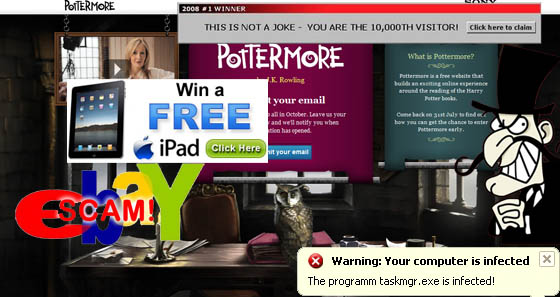 J.K. Rowlings Pottermore is not just being attacked by Dementors but also by scammers! Nefarious cyber criminals are taking advantage of children and infecting computers worldwide with many different viruses.

Pottermore is a new online destination to purchase the electronic book versions of the popular Harry Potter series. Pottermore just does not sell ebooks, but starting in October it will allow participants to chance to go on interactive adventures with the young wizards. You will be able to follow the stories and play along as background characters and interact with the various main characters in each story. Right now access is extremely limited and only open to people playing the daily contest called “Find the Magic Quill” and answering book related questions. Select applicants will win early access and each day the question  is poised at different times.

Online hucksters are taking advantage of people in an attempt to make a quick buck from the people who want get involved. EBAY right now is being plagued by fake accounts, sometimes selling for over $100.00.

Other people are asking for registration and personal information to make an account on Pottermore and then sending spam emails and Malware to infect the victims computer.  Many people are finding they are getting registration confirmation and then opening a file that puts fake anti-virus warnings to sell software.

Finally other people are running various contests and online schemes to get your personal data for surveys and other “Win a Free Pottermore” campaigns. Congratulations you are the 1,000,000 website visitor, Pottermore access is now yours!

The Pottermore official blog even commented on the situation saying “Access to Pottermore is, and always will be, completely free so please don’t be tempted by people selling Pottermore accounts online. You will only be wasting your money—and there are still more clues and chances to come!” They also recommend you do not share your personal information with anyone.