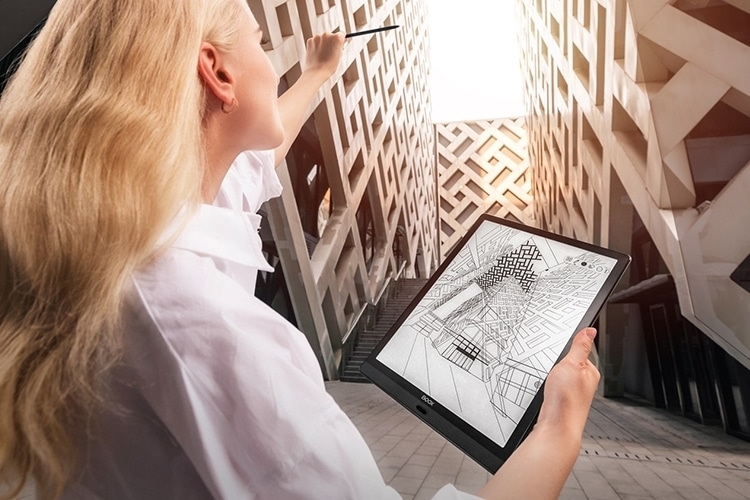 Large screen e-readers and digital note taking devices really haven’t been around for long. The Sony Digital Paper DPT-S1 was the first device to feature a 13.3 inch screen when it come out in 2014 and since then, many other products hit the market, over the years. With so many choices that are now available,  what are the best 13.3 inch E INK devices in 2021?

Hanvon Europa  – This 13.3 inch e-note just came out at the end of 2020 and many people are not aware of its existence. It can read ebooks, PDF files and also take digital notes. It is primarily aimed at the Chinese market, but many people said it can run English, due to it running Android. The device has a WACOM screen and comes with a stylus.

Sony Digital Paper DPT-RP1 – Writing and drawing feel as natural as on real paper, with the added benefits of highlighting and erasing with a flick of the pen, and turning the page without having to worry about keeping track of multiple sheets. The paper-like screen is glare-free, even in sunlight, and its high resolution displays clear, sharp text. Digital Paper shows you more of what you’re reading while staying easy on the eyes. Its letter-size screen can display a double-page spread and even full PDF files, while the 206dpi resolution displays print-quality text in clear detail for long reading sessions.

GVIDO Music Reader – This is the sole dual screen device that is available and it is expensive. Aimed at musicians, it can read sheet music with a two page spread. Page turns can be made with Bluetooth foot pedals or hovering your hand over the IR display. Each screen features a resolution of 1200 x 1600 and there is a WACOM layer, which means you can take notes or edit sheet music with an accompanied stylus. There is an online store on the device, so you can buy sheet music or load in your own.

Fujitsu A4 Second Generation – This is a brand new product that was just released in June 2021. It is a digital note taking device that is primarily geared towards freehand drawing, taking notes and viewing/editing PDF files. Compared to the original Quaderno A4, it is thinner, more lightweight and has a WACOM screen, so pen latency has been improved by over 30%. In addition, the latest E Ink display is adopted for the first time in the world. With the significant power-up of the CPU, the reaction speed such as page turning has also improved by about 20%. View documents in split screen view or 2 page spread, this device has it all.

Onyx Boox Max Lumi – The Lumi is likely the first e-note on the market, and is closer to a multimedia tablet than anything else on this list. It was the first 13.3 with an adjustable front-light! You will be able to read ebooks, view & edit PDF files and draw during the day or night. It is running the Google Android 10 OS and comes with Google Play, which has millions of free and paid apps. Compared to Max 3, Max Lumi is 30% more responsive and overall 10% more power-efficient. It just takes you seconds to download, transmit and open large documents and few hours to fully charge the battery.