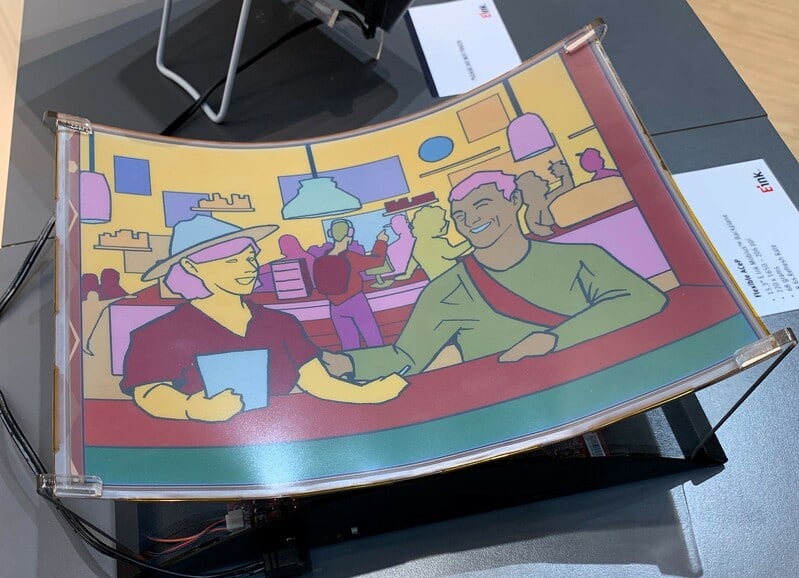 The e-reader industry is going to experience a paradigm shift of e-paper technology that will prompt everyone to upgrade to the latest and greatest. Color e-paper will finally be released in a series of new products in the Fall of 2020. Right now e-notes or digital note taking devices will embrace color first, and this segment will be able to take advantage of the new tech in meaningful ways. I also expect a big name player in the consumer sector to release something, whether it is Amazon, Kobo, Barnes and Noble or Pocketbook, is anyone’s guess.

The name of the color e-paper is called Print-Color e-paper. E Ink told me that it can produce color for each pixel that is displayed on the screen. This includes red, green, blue, black or white. Colors can be combined to give you different colors or shades. The way it works is if you want light blue, blue will be toned down and white will be brighter. If you want orange, then yellow and red would be blended. It will be able to display over 10,000 color combinations.

A senior E Ink Engineer explained the new technology in a statement to Good e-Reader. “The new color e-paper sample that you saw at Wacom Connected, was a CFA (Color Filter Array) type ePaper display, but instead of using glass-based CFA, the color filter is now printed on the E Ink ePaper film. That being said, it inherent all the characteristics and benefit s of B/W ePaper displays, still a reflective display technology, in addition it can displays color content. The color ePaper module itself will be thinner and lighter than the ones with glass-based CFA display module.

E-Notes will be able to embrace this type of screen without changing very much of the underlying code, which is useful for companies using Linux, like Supernote. Android based devices would be able to adopt to color using their existing skinned framework, which includes note taking apps that are made in-house and ditto with the PDF note taking engine. Adding color to the mix will finally allow people who want to draw in different colors a reality. This will give artists the ability to use multiple layers for shading and drawing with the edge of the stylus. Teachers will be able to grade papers easier, businessmen could easily make adjustments or underlines or strikethroughs standout, the possibilities with color for editing PDF files or freehand drawing are endless.

Here is my thoughts on who will release a color device first, based on supply chain knowledge and FCC information. Remarkable will likely not release a color model in 2020, since they have a Remarkable 2 that has been developed and will be issued soon. Pocketbook already has 3-4 new products planned for release in the first or second quarter of 2020, well before color e-paper will be ready. This leaves Onyx Boox or the Boyue Likebooks series to do color first. Both of these companies release a series of new products throughout the year, they do not do them all at once. This gives them the advantage of releasing a few new products, incremental upgrades on bestsellers and then do the big color thing at the end of the year.

Can a color Kindle, Kobo, Nook or Pocketbook be possible in 2020? I believe only one of these companies will do it and my bet that it will be Kobo. Amazon is a reactionary company now, they do not pioneer new tech, they adopt key aspects once something new has been proven to be viable. Barnes and Noble just released the Nook Glowlight 7.8 last year, so I don’t expect them to release anything in 2020, they are normally on a three year cycle before selling new devices. Kobo has proven to be the least risk averse, they were first to market with a five inch e-reader, the Mini. They also popularized the modern front-lit screen, amber LEDS, waterproofing and integration with Pocket for news articles and Overdrive, for borrowing and reading ebooks from the public library. My gamble is on Kobo to release a color model in 2020.

Anything else new besides color e-paper? The  Clearink e-paper system has yet to be in a commercial product, the e-paper technology is basically in development hell. Plastic Logic is now offering a complete package, that involves prototyping, manufacturing and software, instead of begging people to use just their screens. They also have a strategic investor, E INK, that will offer vendors they deal with, the option of adding a Plastic Logic backplane, that might increase ereader resolution from 300 DPI to 600 DPI.

I am very bullish about the e-reader industry going forward. Since late 2017, they have been making a comeback. There is more interest in new models and I know many people that bought two or three different units in 2019. Our web traffic is at record highs and even our e-reader store is doing really well. Color will change the game.