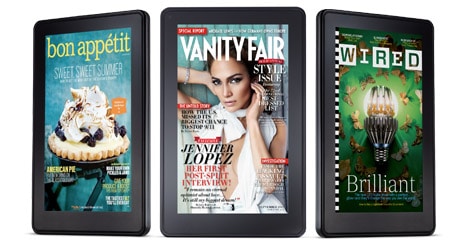 The Amazon Kindle Fire has been THE most anticipated tablet to launch since the original Apple iPad! This is with good reason, as Amazon has one of the best ecosystems in the world and has been absent from the tablet race that has engulfed almost every major company in the world. Today at a press conference in New York they took the wraps off of the Kindle Fire.

The Kindle Fire has a 7 inch Gorilla Glass display with a resolution of 1024×600 pixels. It has a capacitive multi-touch display with IR, which means it is very responsive. It is powered by a TI OMAP4 dual-core processor and has 8 GB of internal memory.

Battery life should net you around 8 hours of constant use, including reading and surfing the internet. Speaking of the internet, Amazon did not incorporate 3G into this unit to keep costs down. They also did not include a webcam, but left WIFI in. There is also a top mounted stereo speakers and a 3.5 mm headphone jack.

Software wise, Amazon customized its own version of Google Android, similar to how Barnes and Noble crafted their GUI for the Nook Color. You can customize your device with applications from the Amazon App store, which currently has over 10,000 free and paid apps. The popular aspect of this service is the free app of the day.

Amazon invented X-Ray, a new feature that lets customers explore the “bones of the book.” With a single tap, readers can see all the passages across a book that mention ideas, fictional characters, historical figures, places, or topics that interest them, as well as more detailed descriptions from Wikipedia and Shelfari, Amazon’s community-powered encyclopedia for book lovers. Amazon built X-Ray using its expertise in language processing and machine learning, access to significant storage and computing resources with Amazon S3 and EC2, and a deep library of book and character information. Their vision is to have every important phrase in every book accessible to the program.

Whispernet has been a huge success for delivering content to the end user. Amazon announced that not only can you use the service that automatically syncs books and media to your various devices, but it now handles movies too! Start streaming a movie on your Kindle Fire, and when you get home, you can resume streaming right where you left off on your TV, avoiding the frustration of needing to find your spot. Right out of the box, Kindle Fire users will experience the benefits that millions of Amazon Prime members already enjoy; unlimited, commercial-free, instant streaming of over 11,000 movies and TV shows with Prime Instant Video and the convenience of Free Two-Day Shipping on millions of items from Amazon.com.

The main selling point behind the entire web experience is a feature called “Silk.” It is a “lightning-fast web browser” running on Amazon’s EC2 cloud computing engine. This means that the browser functions in the cloud. One cool aspect of this is that it recognizes the websites you visit most often and will actually pre-cache them, so they load almost instantly. What about Adobe Flash you may ask? This fully supports it!

It will ship out November 15th and costs a paltry $199. I think I know what holiday gift most people will be asking for.