You are here: Home / Commentary / Will the New Nook Tablet Run Windows 8? 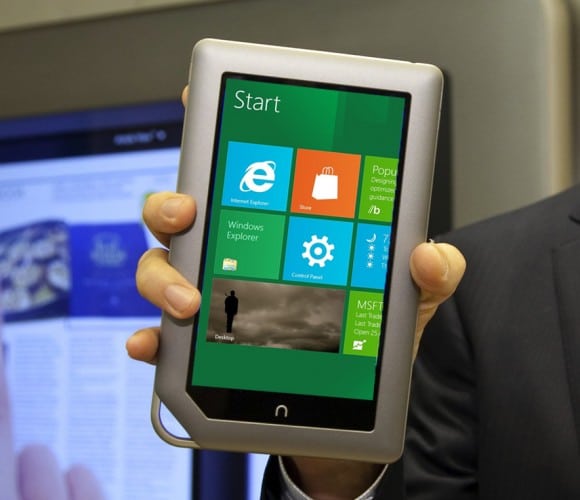 Earlier this year, Microsoft decided to invest in Barnes and Noble to a tune of $605 million dollars, over five years. This deal is going to bring the Nook eBook ecosystem to one of the premier showcase pieces for the upcoming OS. This gives Barnes and Noble the ability to expand outside of the USA and UK market, to sell books worldwide. This weekend, rumors are swirling about the next generation of Nook Tablets, to have Windows 8 as their new operating system.

When Barnes and Noble originally debuted the Nook Color a few years ago, the company was betting on Android to be one of the prime movers for its growth. It curated its own app store, that allowed developers to customize apps based on the screen and resolution. With subsequent followups to the Nook Color in the form of the Nook Tablet line, the company maintained a heavily customized user interface to give you an alternative to a vanilla Android experience. With Kobo, Amazon, and other companies very invested in Android, is the time right for B&N to give us a new experience?

One of the benefits of Windows 8 for the Nook Tablet 2 would be a more global appeal. The current line of Nook Tablets only allows customers in the USA and upcoming UK launch to tap into the ecosystem. If you live in Canada or in other international territories, you cannot buy books, apps, movies, or even use the unit if you don’t fake a USA address. In order to expand, B&N needs to release a device that would allow all markets to purchase it and buy content. This would give the company a huge advantage over the Amazon Kindle Fire HD line, which only lets you purchase a large number of things if you live in the USA.

The Microsoft and Barnes and Noble partnership may prove fruitful. Despite the rumors surrounding the Nook Tablet gravitating towards a Windows experience, I think B&N has too much invested in Android to make a huge shift. My thoughts are that B&N will produce an Android Tablet AND a Windows Tablet to see which one has the greater ability to effectively penetrate the market.

At any rate, Barnes and Noble normally announces new devices in New York around the end of this month every year. We won’t have to wait any longer than four weeks to find out the scoops. Of course, Good e-Reader will be live on the scene for the announcement, to give you pictures, video, and all the news.