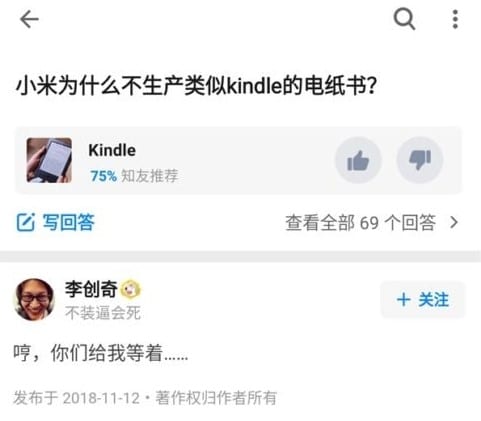 Xiaomi developed a prototype e-reader last year and it was shelved as the company started to focus on smart home accessories. It looks like they might be doing something e-reader related sometime in 2019, as they are trying to work out publishing deals, so they can sell ebooks right on the device.

Many executives a Xiaomi have responded recently on various forums and Twitter threads, verifying that they have plans for an e-reader. In the past few years the company has strengthened their sales and marketing teams all over the world and they have a recognizable brand.

Xiaomi is no stranger to E Ink products. They have released a few products over the years, such as a Digital Thermometer Hygrometer. An e-reader would make sense, as the industry has made a comeback in the past twelve months and sales are booming for everyone involved.

One of the added benefits of creating an ebook ecosystem is that they could create Android e-reading software and a retail experience for all of their phones, which would lead to increased monetization.