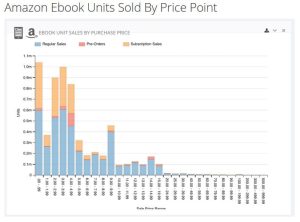 The number-fanatics behind the Author Earnings report have released another installment in their in-depth analysis of how book sales are taking shape across the publishing landscape. While there were very few earth-shaking surprises in the data this time around, it’s more like enough proof that a few long-held beliefs about publishing can finally be put to bed.

1. There’s no “good” or “bad” time to publish your book if you’re an ebook author. If you’re selling print editions AND you’re selling them in brick-and-mortar bookstores, you’ve got some work cut out for you in terms of when print titles sell. That might mean you want to strike while the iron is hot, but depending on what you write, it could also mean that you want to plan your book launch when customers aren’t buying these titles.

However, ebook authors (which is really any author who sells an ebook, regardless of whether they offer their titles in print or not) have some good news: “the pool is open,” so to speak. Ebook sales from month-to-month remained almost constant, meaning there’s no such thing as a bad time to release your book, barring a few specific and minor exceptions.

2. Self-publishing isn’t losing ground. There was talk with some previous editions of the Author Earnings report (mostly from naysayers) that self-publishing’s days were numbered, that the fad had faded. This end-of-2017 report says otherwise; indie authors might not be experiencing the boom they once did, but much like the point above, things have evened out, leaving indie authors holding a significant amount of market share.

3. Ebooks aren’t only for romance readers. This one may have been more of a popular sentiment than a tightly held industry belief, but for a while there, the stereotype of the voracious reader devouring multiple titles a week was always lobbed at the romance fans. First, that’s still a popular stereotype only because romance fans are avid readers. However, when it comes to actual ebook sales, the romance genre was actually in third place behind Literature & Fiction, and Mystery, Thriller, Suspense.

4. Print is dead…unless you’re a college student. Okay, so that statement was fairly overarching, but it was nice to bring up another longtime myth. No, print isn’t completely dead. However, the top selling category in print in 2017 was Textbooks, followed by Children’s Books and Business/Money books. Make of that what you will. When it comes to pleasure reading, it’s just not happening as much in print.

5. Books don’t sell at the 99cent price point. Weeeeeell, that’s not exactly true. For years, different polls have looked at book buying behavior and the standard thought was this: if the author didn’t think the book was worth a dollar, neither will the reader. However, in 2017, the 0.00 to 0.99cent price point sold the most number of ebooks, followed by the 3.00 to 3.99 price point.

For the rest of the amazing insights from the number crunchers behind Author Earnings, click here to read the report.