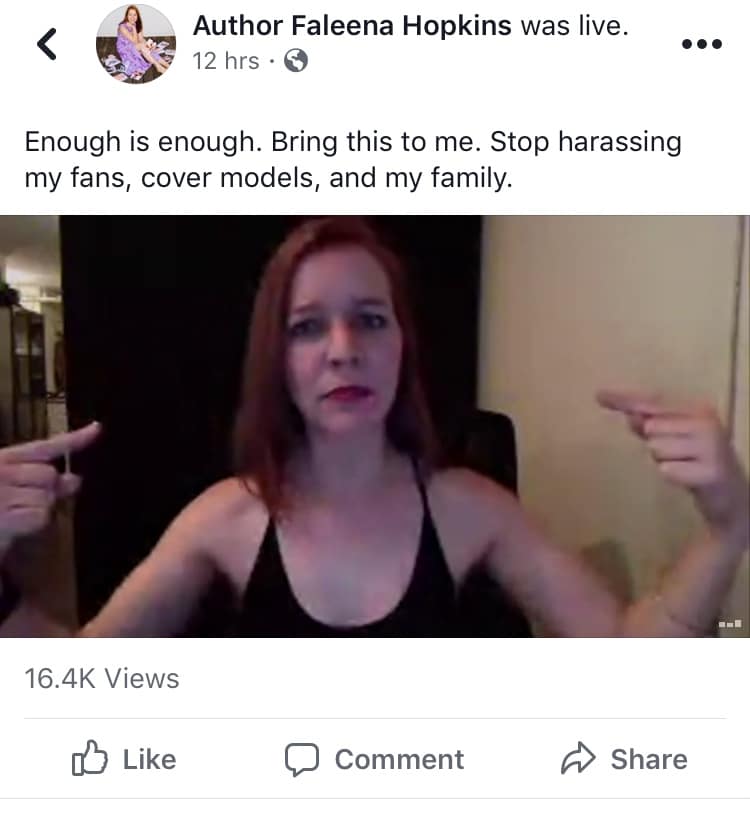 Authors and readers alike have been following the saga of #cockygate, the internet-blowup surrounding one author’s attempt to bully other authors into changing the names of their books. Author Faleena Hopkins first wordmarked her romance series title as it appears in a logo, but then may or may not have trademarked the word “cocky.” As such, she began reaching out to authors who also had used the word cocky in the titles of their books, threatening legal action if they didn’t change the names of their books immediately.

Hopkins has steadfastly continued to claim that this is to protect her brand, and that some of her hapless readers had wasted good money on other authors’ books without meaning to because they were confused by the titles. The authors who have received these not so polite threats of having their books pulled from Amazon (costing them their rankings and their reviews, even if Amazon later realizes the error and reinstates the book) have repeatedly stated that they are entitled to use a very old word in their titles.

Today, Hopkins took to the airwaves of Facebook Live to release a video–one that was about an hour and a half long, unfortunately–unleashing her fury on the members of the author and reader public who have not agreed with her move. She claims (without providing proof) that not only have her readers, her cover models, and her family members been attacked by angry mobs, but also read a series of thank you cards that allegedly came from readers who are grateful to her for her books and her efforts to protect her brand.

The remainder of her video, when not directly addressing the fact that she feels justified in trademarking a word from the dictionary and when not speaking about her legions of fans (who have not turned out on social media to defend her, which Hopkins explains is because she directly ordered them not to for their own safety), was devoted to how to have a brilliant writing career like hers.

Perhaps the most difficult thing to endure throughout the long video was the melodramatic “I’m the victim here” mentality peppered with profanity and accusations. Hopkins, rather than releasing an apology for the damage she’s caused, stuck to her guns about her right to do this and how the authors who’ve made a fuss about being threatened didn’t have a leg to stand on.

Earlier today, Hopkins’ author page on Facebook was taken down, along with the video. For anyone still interested in what the author has to say (spoiler alert: there is no apology, no justification, and no reasonable explanation), Jenny Trout live-tweeted the entire experience for those who were unable to watch it and then posted about the experience on her site.