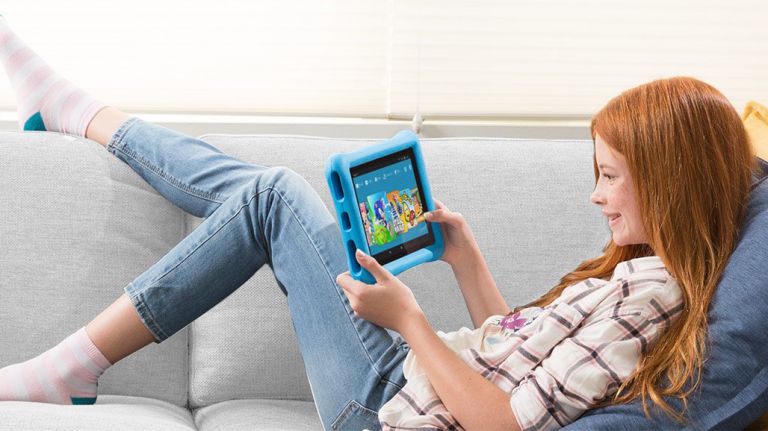 Amazon is rebranding their Freetime and Freetime Unlimited programs for the first time ever. They will be known henceforth as Amazon Kids and Amazon Kids+. Amazon has stated that along with the name change, they will be adding new features.

The idea behind Amazon Kids and Kids+ is to give control to parents, allowing them to lock down a Kindle or Fire tablet and know that the child can only access appropriate content. It gives lots of controls to parents, while giving the child a UI that’s simpler and only filled with the right content. The new system is basically designed both for small children, and now ages 8+.

Amazon Kids now offers more flexibility to customize the Amazon Fire tablet software experience, so it can grow with your child. The new home screen theme, recommended for kids eight and up, looks and feels more like a “grown-up” tablet. The new theme will begin rolling out in the coming weeks, and parents will be able to select it in profile settings under the “Adjust Age Filters and Themes” section in Amazon Parent Dashboard.

Another new feature brings an Alexa feature to Amazon Kids. If kids have an Alexa device in their home, like an Echo smart speaker, they can use their tablet to broadcast a voice message to everyone in their home through the device’s “announce” feature. Because this feature means Amazon is listening to and processing the child’s voice, it will require parental consent.

There is also more music and videos in the Amazon Kids section. Now kids can enjoy hundreds of new video titles hand-selected for ages six to 12, including gaming playthrough videos and PG and live-action titles from popular brands and characters like Angry Birds, LEGO, Transformers, Barbie, Carmen Sandiego, and more. We’ve also added easy access to music stations from iHeartRadio Family directly on the Amazon Kids home screen of your child’s Fire tablet.