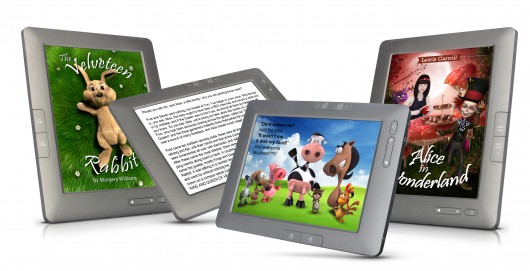 A survey conducted by children’s book publisher Scholastic has revealed some interesting facts. It shows that children have shown a preference to read if it’s with an e-book reading device. With this is mind, Ergo Electronics plans to launch two new color e-book reading devices named GoBook at the London Book Fair.

The first of the two has been named Imagine and features an 8 inch 800 x 600 pixel back lit touchscreen display. The e-reader is powered by an ARM Boxchip E200 Micro-processor and includes a 4 GB storage for storing e-books. There is also a MicroSD card that will pack in more e-books when needed. Providing the juice is a 2800mAh battery pack that the manufacturer claims is good enough for about 8 hours of usage on a single charge.

The Imaging is compliant with the ePub, PDF, HTML, TXT, RTF, FB2 e-book file formats and also boasts of other features, such as a built-in microphone, speaker, and a 3.5mm headphone jack. The Imagine is also capable of playing back audio and video files. However, a drawback with the Imagine is that it cannot connect to the internet directly. As such, downloading e-books to the Imagine e-reader will need another computer as the middleman. The Imagine is right now available in the UK for an affordable £74.99, which translates to around US$120, though the e-reader isn’t yet available in the US.

The GoBook range also includes a tablet like device name GoBook Surf. The Surf also comes with an 8 inch capacitive touchscreen display and is 802.11b/g/n Wi-Fi ready, which means, as the name itself suggests, the tablet can connect to the internet on its own. The Surf also boasts of a 1 GB DDR3 RAM and includes 8 GB of internal memory. The tablet also includes a Micro SD card slot to take care of more storage requirements.

The GoBook Surf is still in its pre-production stages, but would be ready for its market debut sometime next month. Price is expected to be around £129 or US$205, which if true, will make the GoBook Surf a bit more expensive than the Kindle Fire.

Speaking of the company’s reading initiative, Sam Goult from the “Let’s Get Reading” arm of the company said, “the Reading experience will be powered by our new GoReader app which will be on the Play Store to download within the next week.”

Further, Ergo Electronics is also in the process of creating colorful and animated original e-book titles meant for all age groups with about 150 of them likely to be ready in the next 12 months.