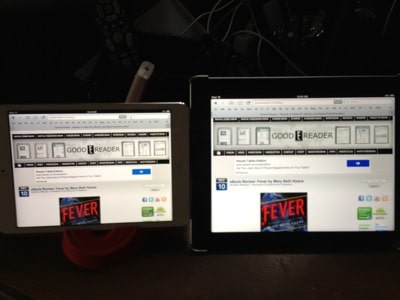 So I bought an iPad Mini about 3 weeks ago.  I didn’t really want one, but I figured I needed to get the hang of it as an e-reading device.  I have a 3rd gen iPad, which is attached to me by an umbilical cord.  I take it everywhere I go, both inside and outside the house, and I use it more than I use my iPhone.  So what do I need a Mini for?

Much to my surprise I’ve found that I’m using the Mini far more than the iPad!  First, it has taken over from my Kindle PaperWhite as the e-reader of choice. I don’t like using the iPad as an e-reader because it is too heavy.  Also the screen is actually too big.  It is hard to encompass the whole screen in field of reading vision without moving my head, so I usually use it in landscape mode and with the two-page view in the Kindle reader.  Because of this I adopted the PaperWhite as my e-reader of choice.  However, I’ve found that the Mini works just as well.  It’s light and with the backlight turned down I don’t have glare problems.  After reading for a while on the Mini the PaperWhite screen looks primitive and the fonts jagged.  One problem with the Mini is that the bezel is too narrow, so I am constantly turning pages accidentally.  Apple says that the Mini is supposed to ignore touches in the bezel area, but this simply isn’t true.  It’s an annoyance one has to get used to.

Other than reading, the Mini has taken over a lot of functions of the iPad.  To be honest, for watching movies, be it through streaming or those I have onboard, I don’t see much difference in sharpness between the Mini and my Retina iPad.  In some ways watching a movie on the Mini is preferable to the iPad because of the better speakers.  I almost always have to use earphones on the iPad, but I can easily get away without them on the Mini.  If only both machines had the superb speakers of the Kindle Fire HD.  That still rules the roost!

However, for work-related stuff, such as reading RSS feeds, the regular iPad is still the machine of choice.  The larger screen makes detail work a lot easier and there is certainly no comparison when it comes to typing.  Also, the larger screen is much better for using the iPad as a second display via Air Display.  The Mini is just too small for this.

So I’m happy with my Mini and the two machines complement each other very nicely.  The Mini is now my “outside the house” machine of choice, as well as my e-reader of choice.  The iPad is my “inside the house” machine for work, games and most movies – where I don’t need earphones.  I never expected that both machines would be so useful and complement each other so nicely.