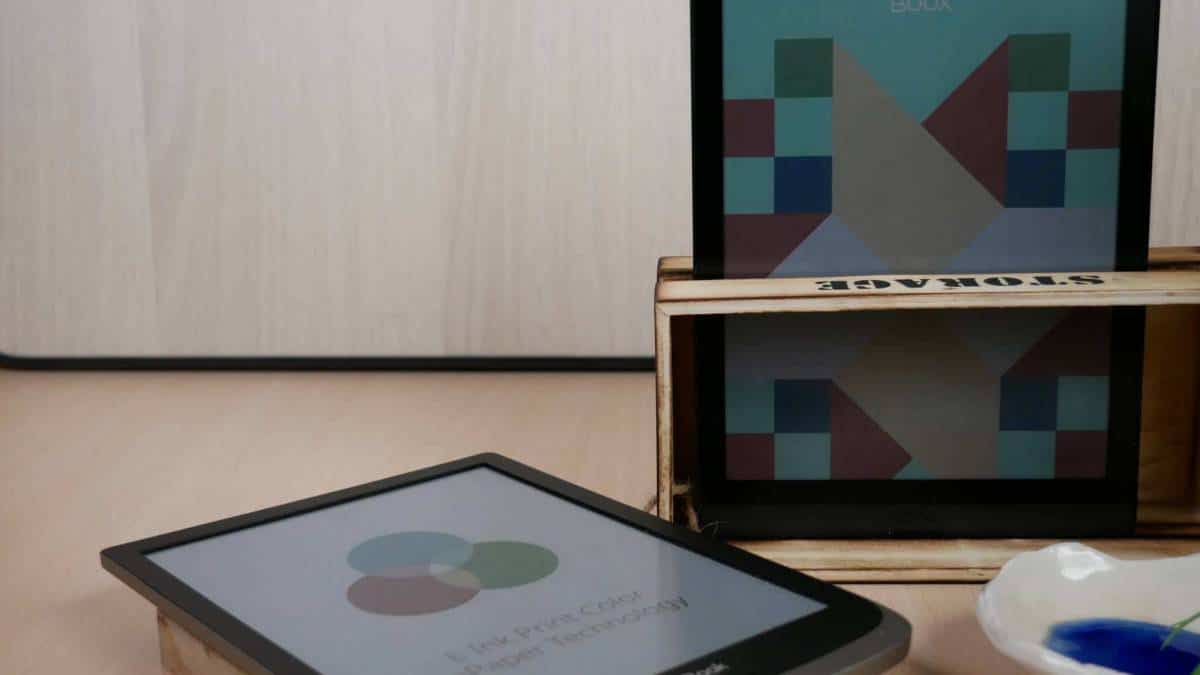 The Onyx Boox Nova 3 Color and Pocketbook inkpad Color are two e-readers that are running the latest generation E INK Kaleido Plus color e-paper. These devices are quite different when it comes to the overall user experience, the Inkpad is running Linux and supports a myriad of ebook formats, whereas the Nova also reads books, but is running Android 10 and has Google Play, it is also a dedicated e-note, so via the WACOM layer, you can draw, take notes or edit PDF files. Which one is better for color content? This comparison will give you a  better idea.

The Onyx Boox Nova 3 Color features 7.8 inch E Ink Carta HD and Kaleido Plus color filter array. The screen is completely flush with the bezel and has a  AG glass flat cover-lens. The resolution of the black and white display is 1872×1404 with 300 PPI and the color screen has a resolution of  624×468 with 100 PPI.  It can display over 4,096 different colors, with greater color accuracy and a 3x improved color gamut from the original Kaleido screen tech found on the Onyx Boox Poke 2 Color. Meanwhile, the Inkpad color has the same screen size and resolution. The main difference is that it has a sunken screen and bezel, which makes a huge difference when reading color content.

All e-readers have a matte based film that protects the E INK e-paper panel. The Inkpad has an exposed e-paper screen, with no layer of glass or a WACOM layer, so there is less getting in the way, when viewing color content. Colors appear richer and more vibrant, this is evident when reading ebooks, because you are seeing a typical grey background with sharp black text. The Onyx background for ebooks appears to be generating a less pronounced greyscale, but it appears to be overly saturated. This could be a due to a couple of reasons, the glass based display could be interfering with the CFA when displaying colors and these colors are bouncing back from the glass. It could also be due to the colors diffusing with the WACOM layer, since the Nova 3 Color is the first attempt at an e-note. 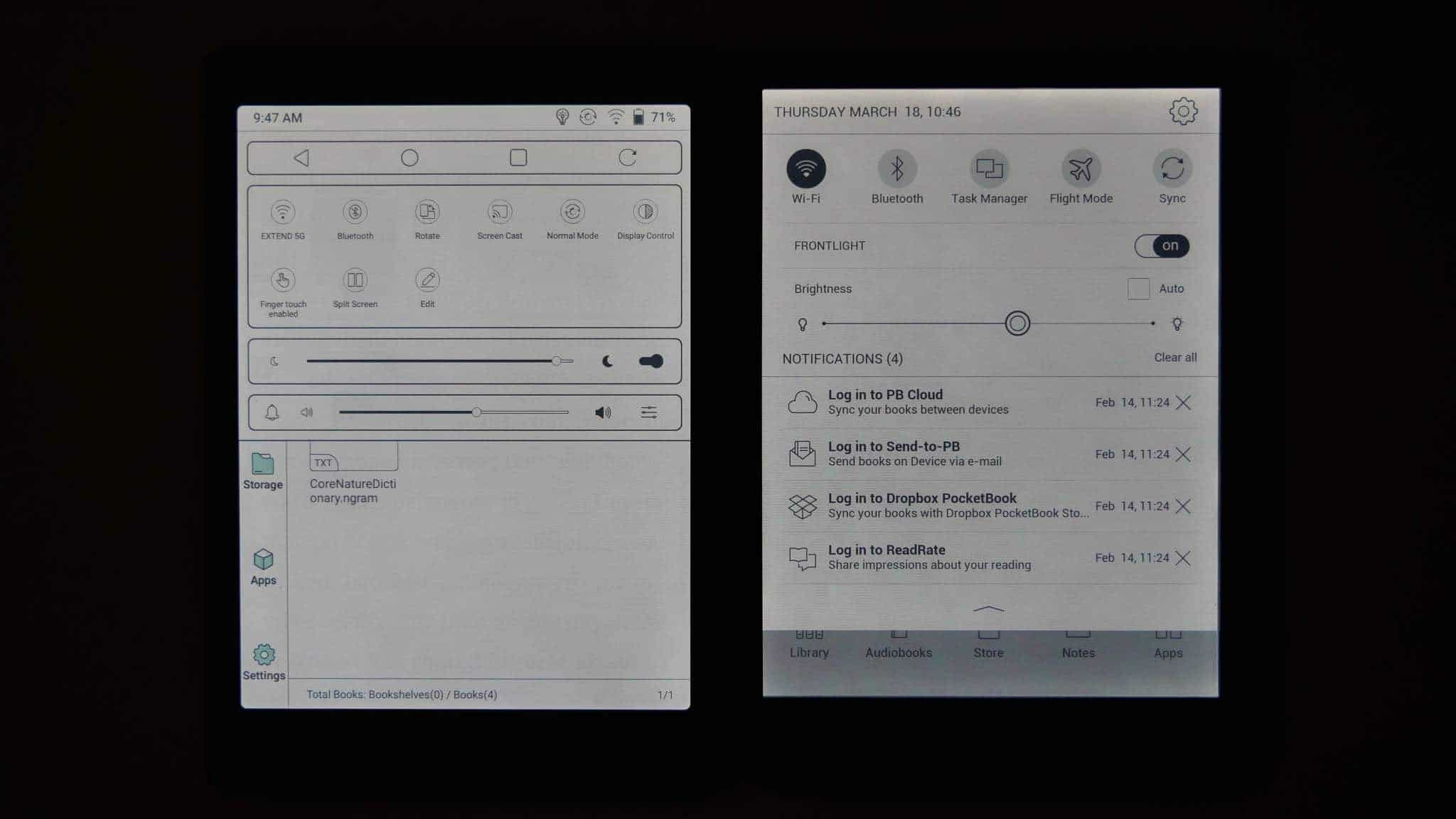 When it comes with the front-lit display, these only pack white LED lights. Amber LED lights, or warm lighting has not been attempted yet with Kaleido Plus. This is due to the candlelight effect not playing nice with color content. The Nova 3 has 17 white LED lights, and the Inkpad Color has 24 LED lights. With the addition of so many more lights, the Pocketbook has the clear advantage when reading in the dark, color content looks better, because there is better illumination and no dark spots. Text appears darker, there is true blacks. The text on the Onyx appears to be a dull version of black, almost a milky black, with splashes of white. 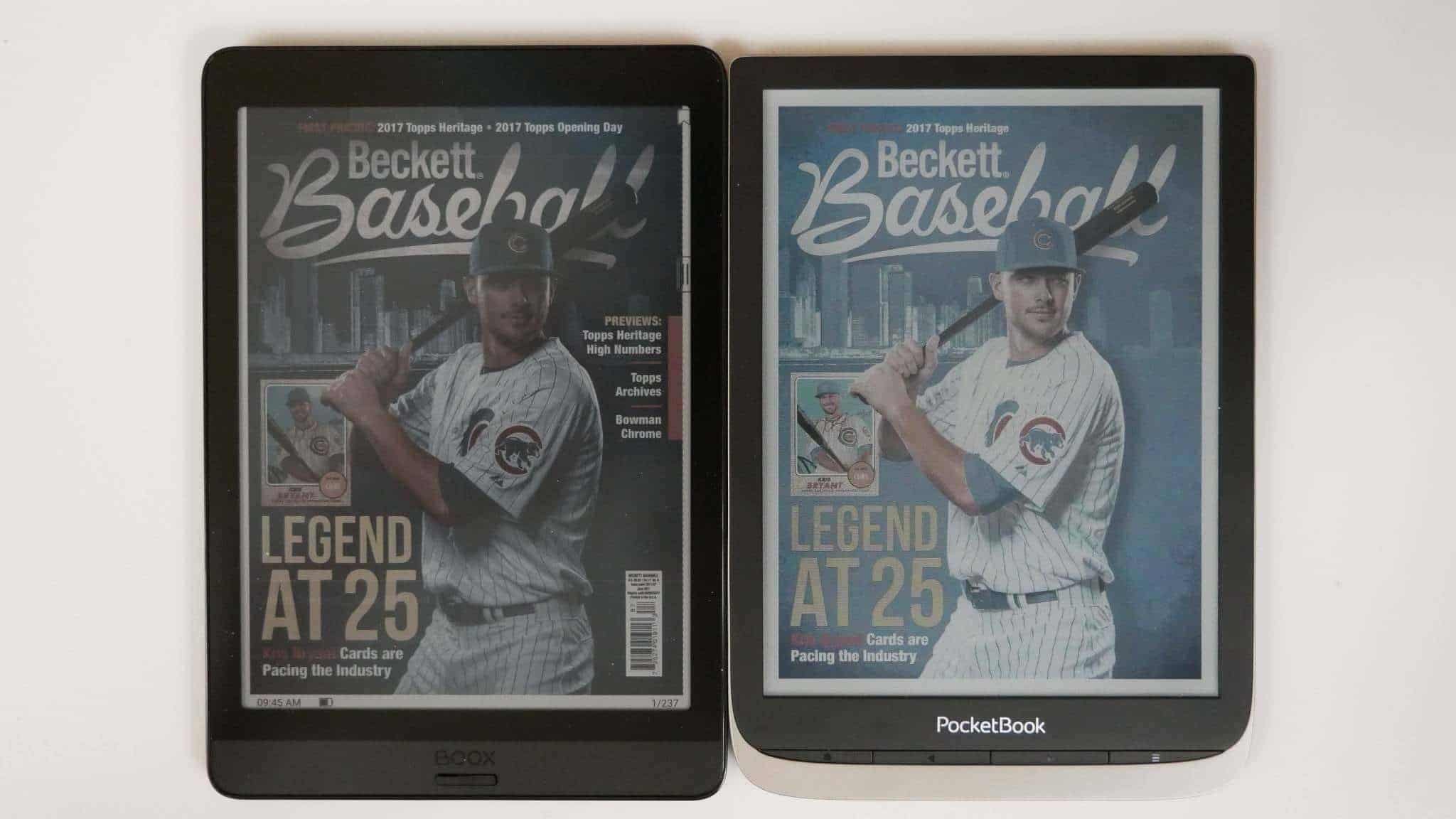 Both of these devices have controls via the software to adjust the color saturation, color depth, brightness, gamma and saturation, although Pocketbook has more options. These were designed to optimize the screen for specific types of digital content, so the same settings for a medical journal would not apply to a manga or a digital magazine. It would be nice if specific settings could be saved for a specific ebook format, rather then what is offered now, which is non-stop adjustments, depending on what you are reading at the time. These controls make a huge difference in the way color is displayed. You can see what we mean by the above image, with everything set to default.

The Nova 3 has better hardware specs and is powered by a Qualcomm Snapdragon 636 Octa core processor, 3GB of DDR4X RAM and 32GB of internal storage. It has a USB-C port with OTG and also has Quick Charge 4.0, so you can power it up to full in under an hour. This model has two speakers that are positioned next to the USB port, this is similar to the way the iPhone does it. There is Bluetooth 5.0, so you can listen to music and audiobooks via a pair of wireless earbuds or headphones. There is a microphone port on the bottom, which can be used for voice communication and also speech to text on the digital note taking app, it also has a new function that allows you to record your audio notes and can be played back whenever you want.  It is powered by a 3150 mAh battery and running Android 10.

The Pocketbook Inkpad Color is only running a dual core 1GHZ processor, 1GB of RAM and 16GB of internal storage. It has an SD card, which is capable of an additional 32GB of storage.  You can plugin a pair of wireless earbuds or headphones and listen to audiobook via Bluetooth 5.1. Pocketbook also includes a USB-C to 3.5mm headphone jack in the box. The Inkpad Color is powered by 2,900 mAh battery and running Linux. It does not have speakers or Quick Charge, the Nova 3 Color also has a larger battery. 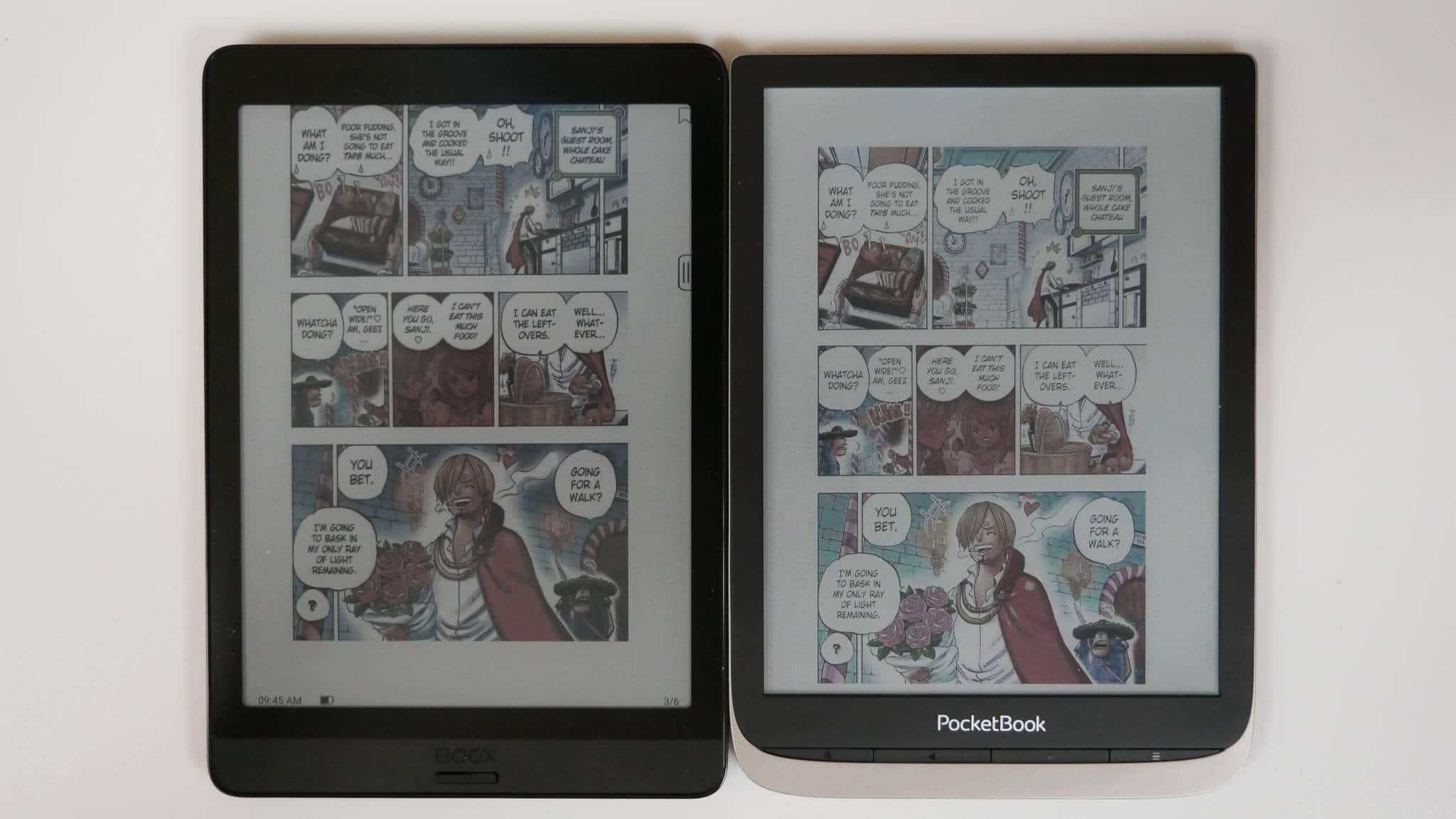 The main reason why Onyx needs beefier specs is because it is running apps. The note taking app for drawing, making notes or developing art with a myriad of colors via the stylus. The e-reading app is Neoreader, another app you will be using a lot. Not to mention complete freedom to download any modern app you want via Google Play. The Pocketbook can get away with less power, because everything is optimized for Linux, so there are not a bunch of things running in the background, like Android does.

What e-reader is better at color? I believe that the Inkpad is very capable and showcases richer and deeper color palette. From reading ebooks to navigating the UI, the black text is more pronounced. The Nova 3 Color is also very capable, but adjustments need to be made out of the box to adjust the color saturation and other settings, whereas the Pocketbook looked really good, in stock settings.

Do you want a dedicated e-reader with light note taking? The Pocketbook Inkpad Color retails for $319.99. If you want an e-reader that is geared towards note taking and installing apps, the Nova 3 is for you, it is more expensive and retails for $419.99.