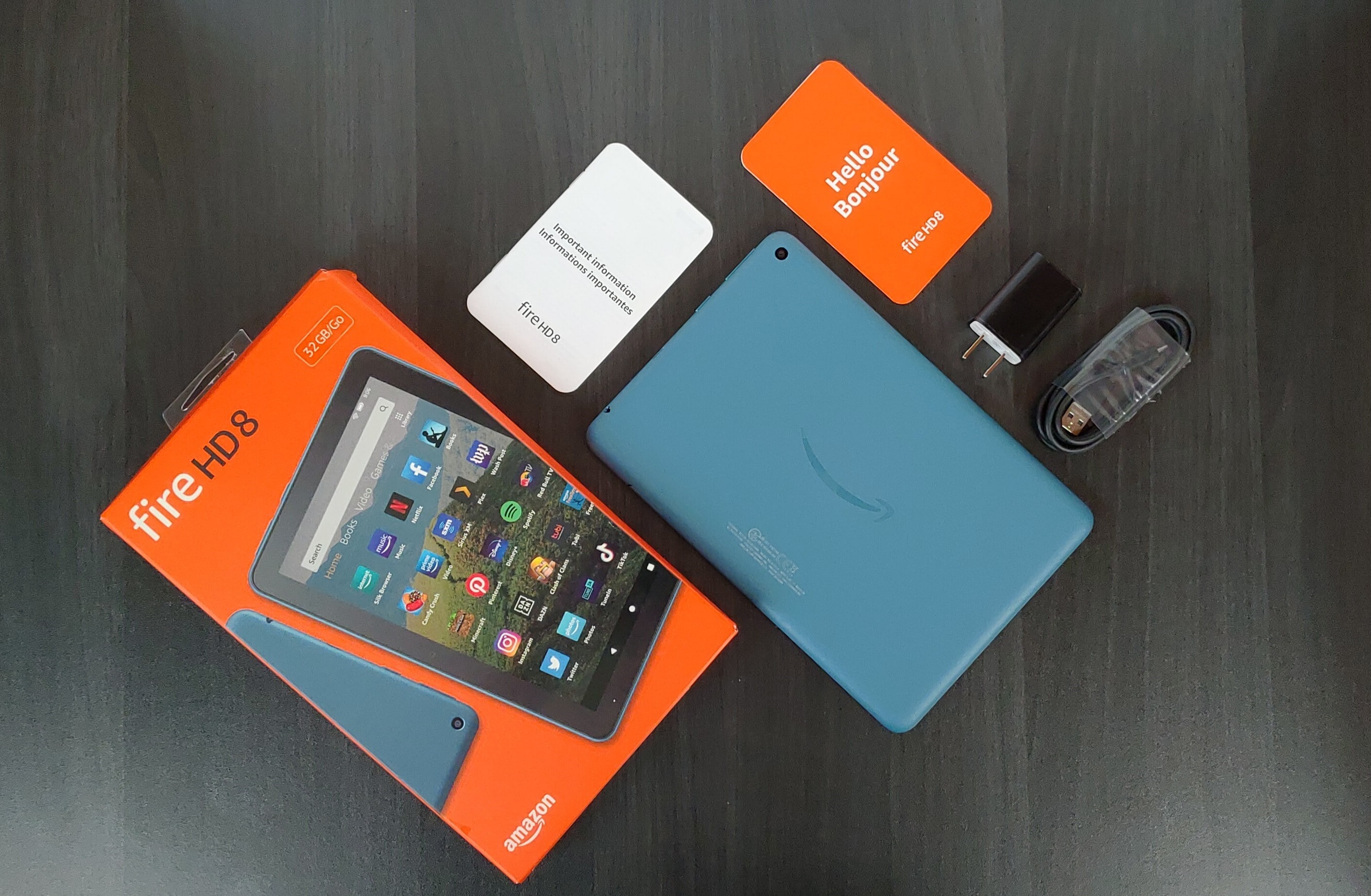 The 2020 edition of the Fire HD 8 has been refreshed and has been available for a couple of months. This tablets major selling points are the faster processor, more RAM, speedier WiFi, and a USB-C port. You will find value in this $89 device if you are heavily invested in the Amazon ecosystem and don’t want to spend a lot of money.

The Fire HD 8 2020 edition features an 8 inch capacitive touchscreen display  with a resolution of 1280 x 800 with 189 PPI. Unlike the Amazon Kindle line of e-readers, this is a tablet, with a backlight, but it does have bluelight filters in the settings menu, to offset the bright screen. You have to know if you are buying this, does not have an E INK display, but a full color LCD tablet.

Some people like multipurpose tablets as their daily driver. Unlike an e-reader, you can play games, download and install apps and consume all of your media content in full color. It also has two speakers on the back, so you aren’t relegated to plugging in a pair of Bluetooth headphones, but you can do it if you want.

It is powered by a Mediatek MT8168A Quad-core 2.0 GHz processor, 2GB of RAM and the internal storage has two different configurations – 32 or 64 GB. There is an SD card that is capable of 1TB cards, which is enough for all of your movies, TV shows, songs, Kindle eBooks, magazines, apps, and games, the Fire HD 8 is the perfect tablet for enjoying entertainment.  There is also a 2MP rear facing and a 2MP front facing camera. Amazon is really billing this device has a Zoom machine in all of their marketing materials. This is the first generation of Fire tablets to have a USB-C port, instead of Micro USB. You can connect up to the internet via dual-band Wi-Fi. The dimensions are 202 x 137 x 9.7 mm and weighs 355g.

The Fire HD 8 is 30% faster than the two-year-old model it replaces and has 0.5GB more RAM, for a total of 2GB. It’s also available in a “Plus” model with 3GB of RAM and wireless charging. If you have the 2018 model, this would be good value to upgrade.

Overall industrial design to similar to previous iterations of the Fire 8 tablets. The front of the tablet has a flush screen and bezel with a camera at the very top, above the screen. On the back is the rear facing camera and the Amazon swoosh logo, in the center. At the very top is the volume, power, status indicator light, USB-C port and a 3.5mm headphone jack. The only other thing is on the very bottom, which is an SD card port, that is protected by a little plastic flap. There are also two stereo speakers, the sound quality impressive.

I think the Amazon Fire HD 8 2020 edition is a no frills tablet, that makes sense if you shop on Amazon, have an Audible account and buy Kindle books. The Amazon App Store does not have the wide selection that the Google Play Store has, so you will be missing out on many fringe apps or new ones. It does have Netflix, Hulu, Sling, Disney+, Philo, HBO GO and NOW, Starz, DC Universe, Showtime, and others. But it is missing CBS All Access, Apple TV+, and YouTube. 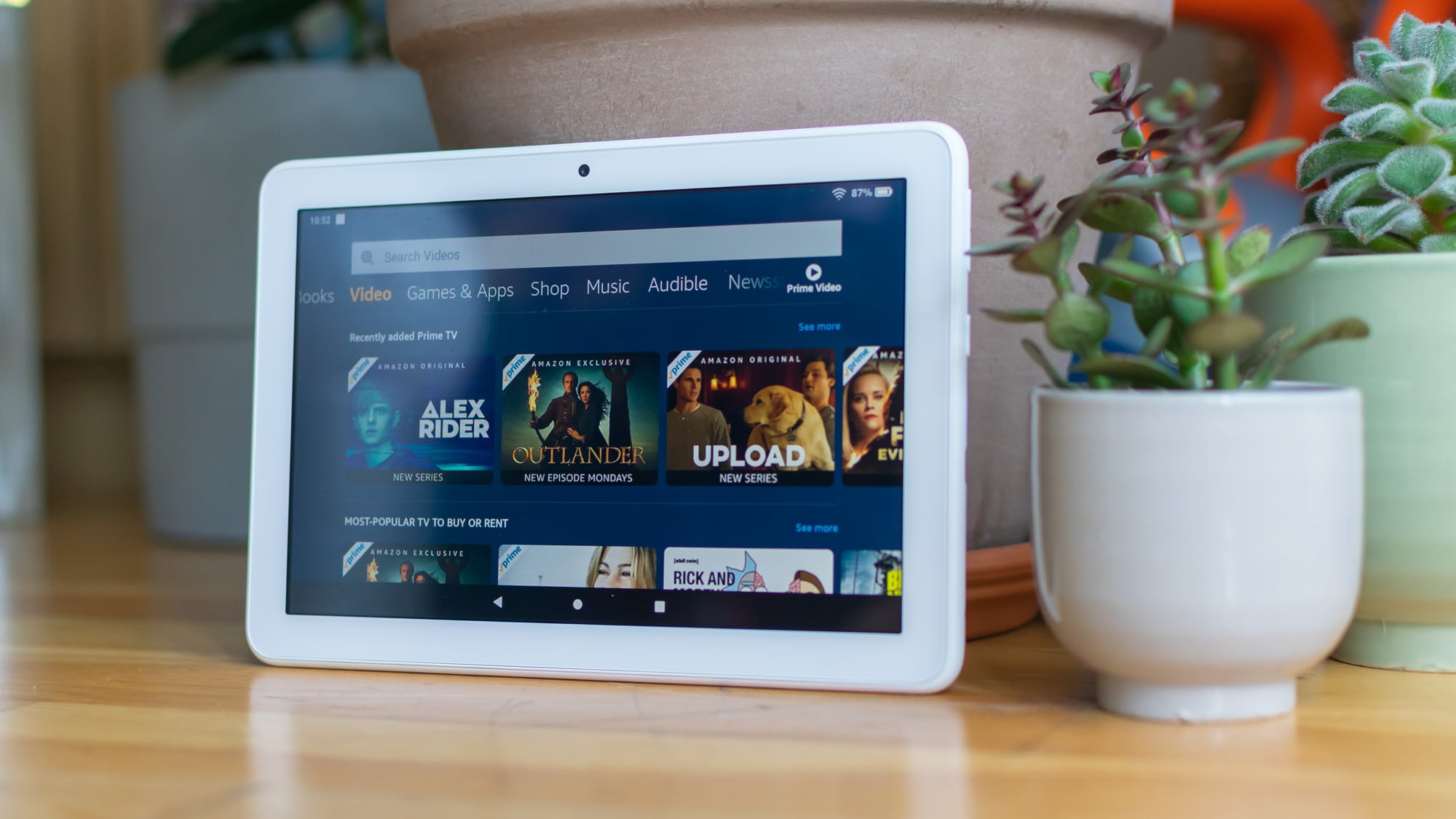 The Fire HD 8 2020 edition is using Fire OS 7.3, which is based on Android 9.0, it obviously is not the most current operating system out there, but Amazon skins their OS, making it rather distinctive.

If you have ever had to seen a Fire tablet in person, the UI and menu system is standard fare. There is a sliding carousel navigation menu on the top. For You, which gives you the time/date/weather and apps you have recently opened, or continue a television series or movie you were watching. Books, is your library and shopping experience for Kindle books. Video and music is where all of your multimedia content is housed, apps, newsstand and Audible. The UI is slimmer than with previous versions of Fire OS and I found it easier to scroll and navigate.

Watching movies, playing games, listening to audiobooks or doing anything with Sound is a great experience, because these speakers have Dolby Atmos, which dramatically enhances everything. I have been using this a dedicated audiobook player, instead of iPhone XS Max, because the sound is that good, the speakers are also larger than a standard smartphone.

The tablet also makes a solid e-reader to read manga, digital comics, magazines and newspapers. Almost all of this type of stuff was developed with color in mind, either a smartphone or a tablet. This is why a dedicated Kindle e-reader always has a hard time with anything other than an ebook. Comixology, Press Reader, Zinio and plenty of other reading apps can be installed. If the Amazon App Store does not have your favorite app, you can sideload it into your device, or use the Silk internet browser to find it online. This is useful for fringe apps, such as manga or anime type of stuff. 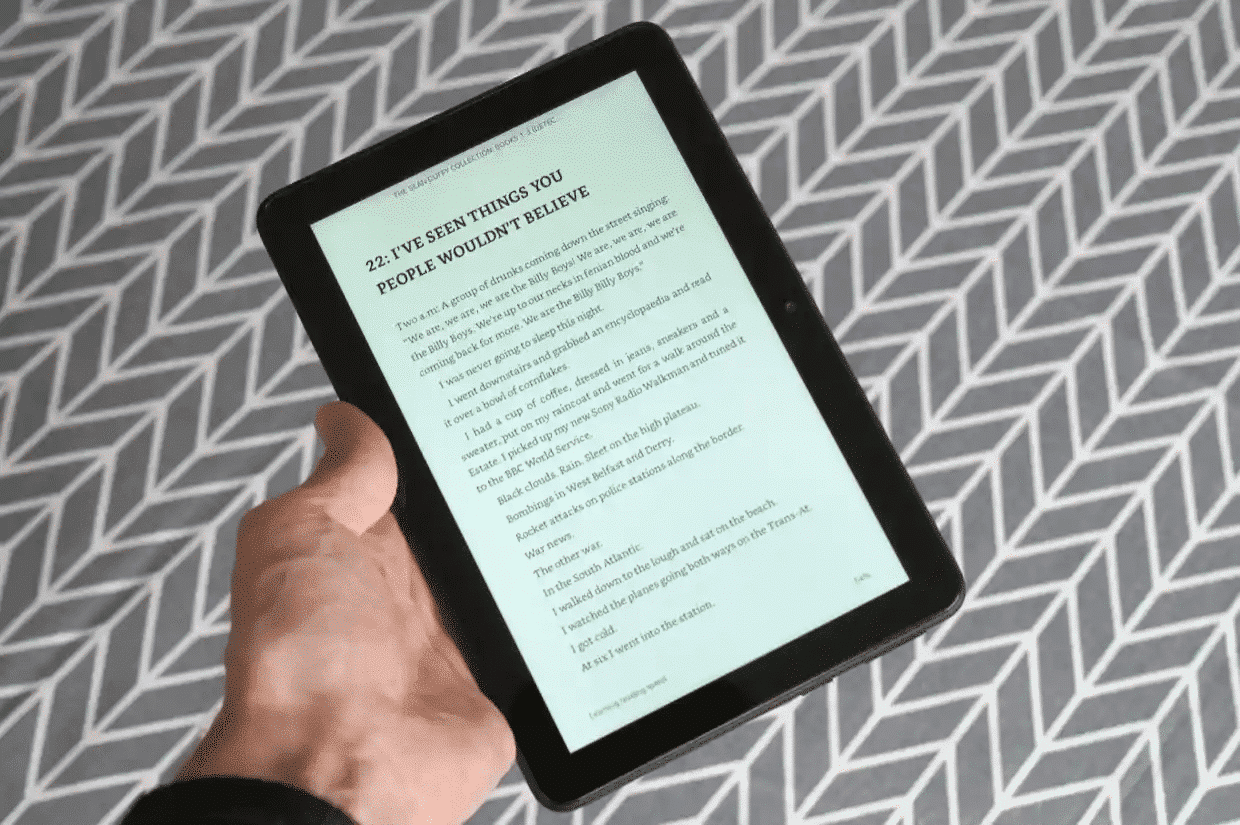 Reading ebooks on the Fire HD 8 is OK, but not great. The screen is only capable of displaying 189 PPI, while a standard Kindle e-reader is 300 PPI. This means that text will not be as sharp, and the fonts tend to as easily read.

One feature that Fire tablets have had for a few years now is Show Mode, which turns the tablet into a smart screen speaker like an Echo Show or Nest Hub (sort of). That feature is once again available here on the Fire HD 8. So long as you either a) leave it plugged in, or b) remember to charge it frequently, it’s a nice touch. You’ll need a stand or case with a built-in stand, but when you enable it, you essentially get two devices (a tablet and a smart speaker) in one. 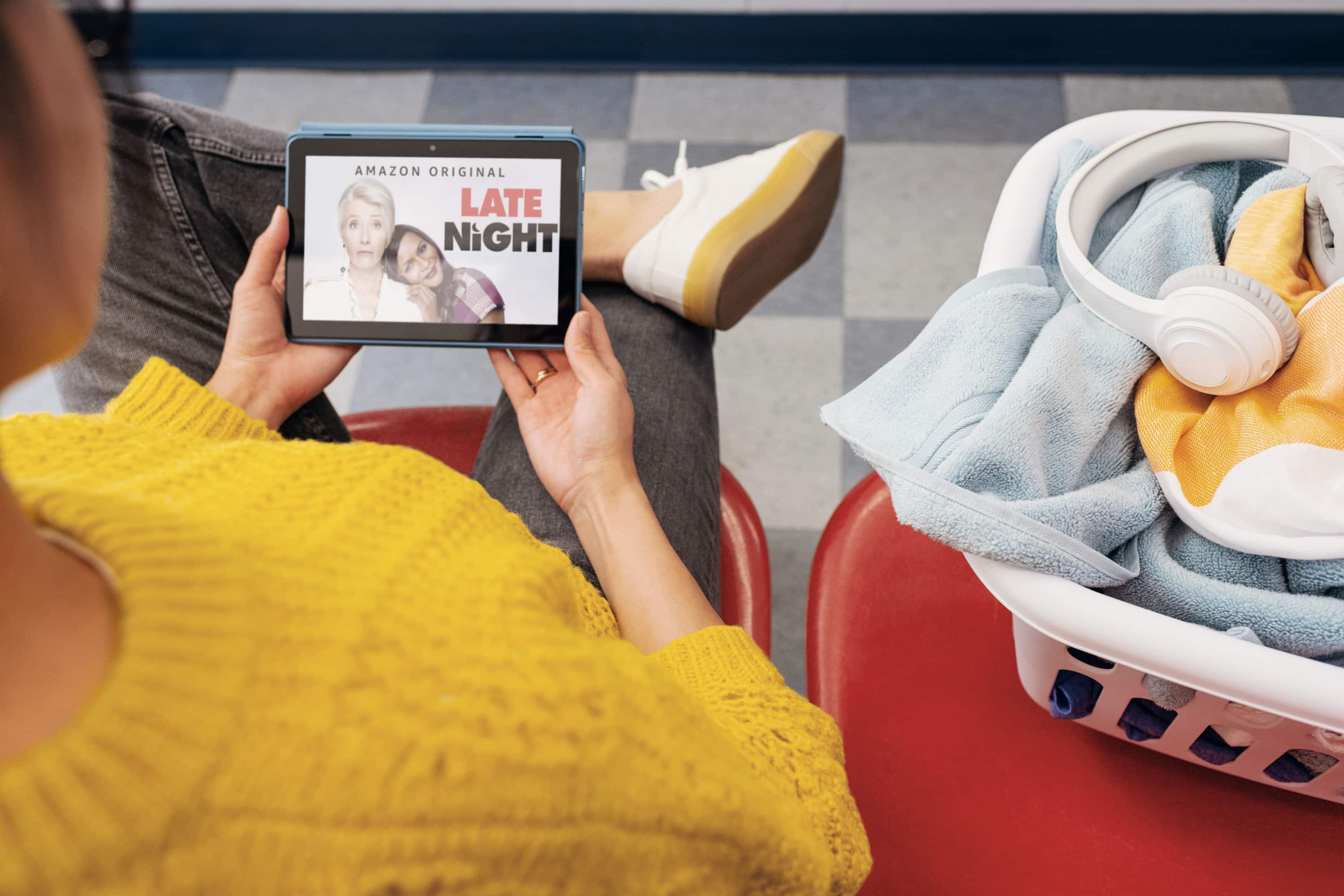 There are not many companies anymore that are in the tablet game. Apple tends to release fairly expensive iPads, with the entry level models costing a few hundred. Samsung has different models all over the map, but their best ones are really expensive and are geared towards digital note taking devices. There are plenty of fringe ones out there, such as the Walmart On series, but they are basically garbage. Amazon is one of the only big companies that consistency refreshes their product line with at least one model per year. Unlike their competition, Amazon targets the extreme low-end of the tablet market, their entry level Fire 7 HD is regularly on sale for $39.

Should you buy this tablet? I would recommend this over the Plus model, which is only available in the US. The extra 1GB of RAM on a cheap tablet, really isn’t worth it. If you want to have a spare one, like a bedroom tablet, a living room tablet, something to reference cooking shows/cookbooks on, while cooking or giving your kids to play with, at $89, it really doesn’t matter if it gets dirty or gets a few dings. It also is good for quick Zoom calls or instant messaging.