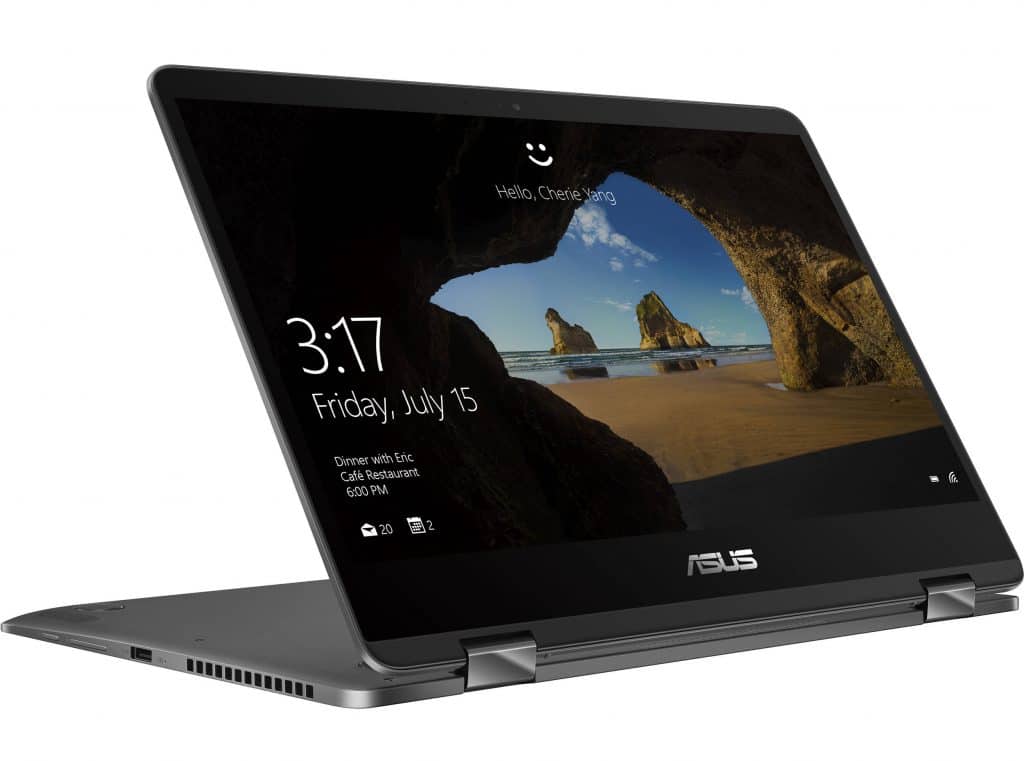 The Asus Zenbook Flip 14 came out in early 2018 and has a 14 inch screen that is almost completely flush with the bezel. It has tremendous resolution and a solid NVIDIA GeForce MX150 to handle music and video editing and also serious gaming.

The Flip features a 14″ NanoEdge touch display with a resolution of 1920 x 180 with 157 PPI and a capacitive 10 point touch. This is not a true two in one laptop, so the screen will not detach. It rotates forward or back 360 degrees. This unit does not come with a stylus, but you can use one for productivity tasks such as Evernote or Onenote or even Photoshop.  The illuminated track pad has a fingerprint sensor that can be instead of passwords or to initiate one-touch login via the Windows Hello feature.

Underneath the hood is a 1.6GHz Intel Core i5-8250U quad core core processor and 8GB of RAM deliver fast and reliable multitasking performance for all of your everyday computing need. There is a giant 256GB solid state drive loads files, games, and other system processes fast, so you can keep your most-frequently played games a quick click away. There is also a MicroSD to expand the memory further. 802.11ac Wi-Fi lets you connect wirelessly to your network and it has integrated Bluetooth 4.1, two USB 3.0 ports, and a USB 3.1Type-C port make it easy to connect a range of additional peripherals, such as a gaming headset, printer, or scanner. HDMI output allows you to connect the laptop to a secondary HD monitor or HDTV for use as a larger display. It also comes preinstalled with Windows 10 Home operating system. At 3.31 pounds, the ZenBook Flip 14 weighs less than the Dell Inspiron 5379 (3.56 pounds), but more than the Lenovo Yoga 920 (3.02 pounds).

This is not a pure gaming laptop, but the integrated Nvidia GeForce MX150 Graphics. This will allow you to easily handle Adobe Photoshop or light music and video editing. I tried out League of Legends and Overwatch on mid level settings and did not notice anything out of the ordinary with my frame rates.

Powering this little beast is a special 57Wh lithium-polymer battery which provides up to 13 hours of autonomy. So even on that long intercontinental flight, ZenBook Flip 14 can go the distance with ease. ZenBook Flip 14 also includes fast-charge technology that lets you recharge battery up to 60% capacity in just 49 minutes.

In terms of build quality, the ZenBook offers a metal chassis that’s only slightly bendy in the lid and keyboard deck but solid underneath. The ZenBook Flip 14’s hinge is quite stiff, which means you’ll need two hands to open it but also that it holds the lid in place through the 2-in-1’s various forms. Whether in laptop, tent, presentation, or tablet modes, you won’t need to worry about the display losing its place.

The Harmon/Kardon-tuned speakers on the system’s bottom produce above-average sound, with rich tones but not a lot of bass. When the tablet is cranked up to 100% there is no distortion. The webcam above the screen is above average, too, capturing detailed selfies even in mediocre light.

Overall this Zebook Flip 14 has a stunning design and good overall performance makes this is a very desirable laptop. 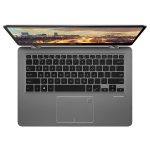