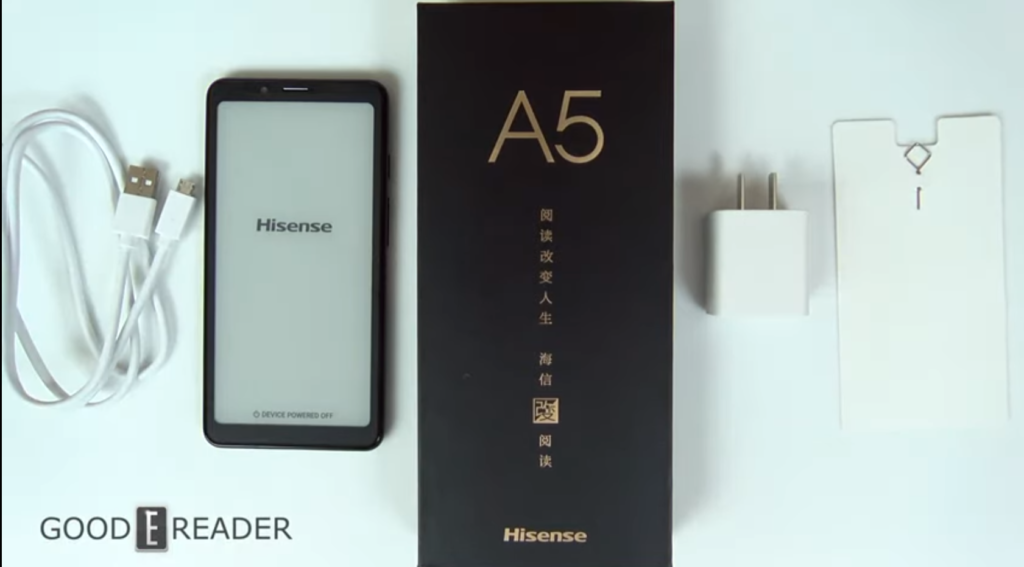 The Hisense A5 E INK smartphone is pretty well the only device of its kind available on a retail level. Every single other phone is either impossible to buy or will come out later this year. In this exclusive Good e-Reader Unboxing Video, we take a look at the Hisense A5 and check out everything that comes in the box. We also checkout all of the documentation, accessories and give you a first look at the phone.

The A5 has a single speaker at the top of the screen, this is used to listen to the people you are talking with over the phone, it can also play audiobooks, music and podcasts.  This device does have an earpiece that comes with it, that hooks up via Bluetooth, so you can hear people more clearly. It also has a 3.5mm headphone jack, so you can plug in a better pair of headphones with a built in microphone.

The retail packaging is uninspiring. It is black all over and has the model number on the front, along with some Chinese writing. There is no specs written on the back of the box, there is only some certification information. The sides of the box, merely state that this is the Hisense A5.

When you open the box, the phone is contained within a plastic sleeve and below that is a wall charger, that is powered by USB. Once you take the phone out, there is a small sleeve with a SIM card removal tool. It also comes with a Micro USB cable, the phone does not have USB-C. There are some stickers with the serial number of the phone and some documentation, such as a quick start guide and warranty information.

The back of the phone is made of a cheap plastic and has the Hisense logo. There is a camera on the upper-left. On the front of the phone is a camera on the left, along with the speaker to hear what people are saying, but no notifications come out of it. On the right side are the volume buttons and SIM card, left has the power button. On the bottom is the microphone, next to the 3.5mm headphone jack.

This is a rather cheaply designed phone, it was designed to be an entry level product, with no frills.