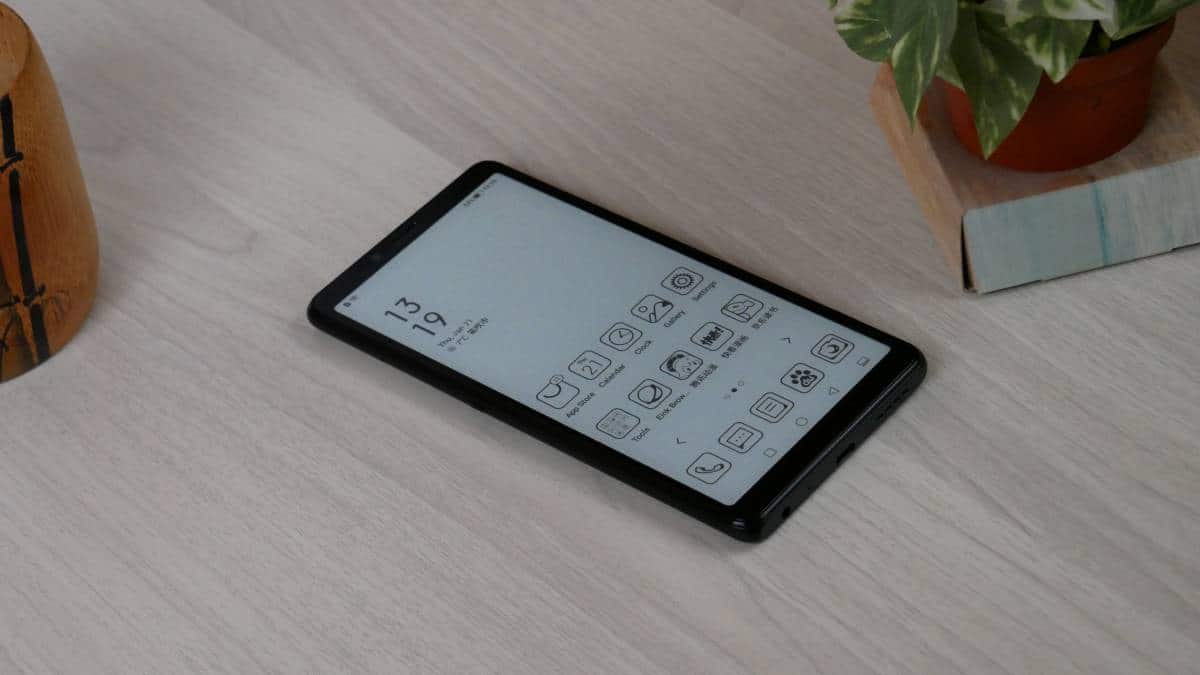 The Hisense A7 is one of the best E INK smartphones that has ever been released. It has great hardware, a very large screen and respectable DPI. You can get access to most 5G networks and 4G LTE in almost major country in the world. Android 10 is a major selling point and Hisense has their own app store to download apps, although you can sideload in alternative stores or sideload in your own favorite apps. Should you buy the A7 as your daily driver? This hands on review should answer this very question. 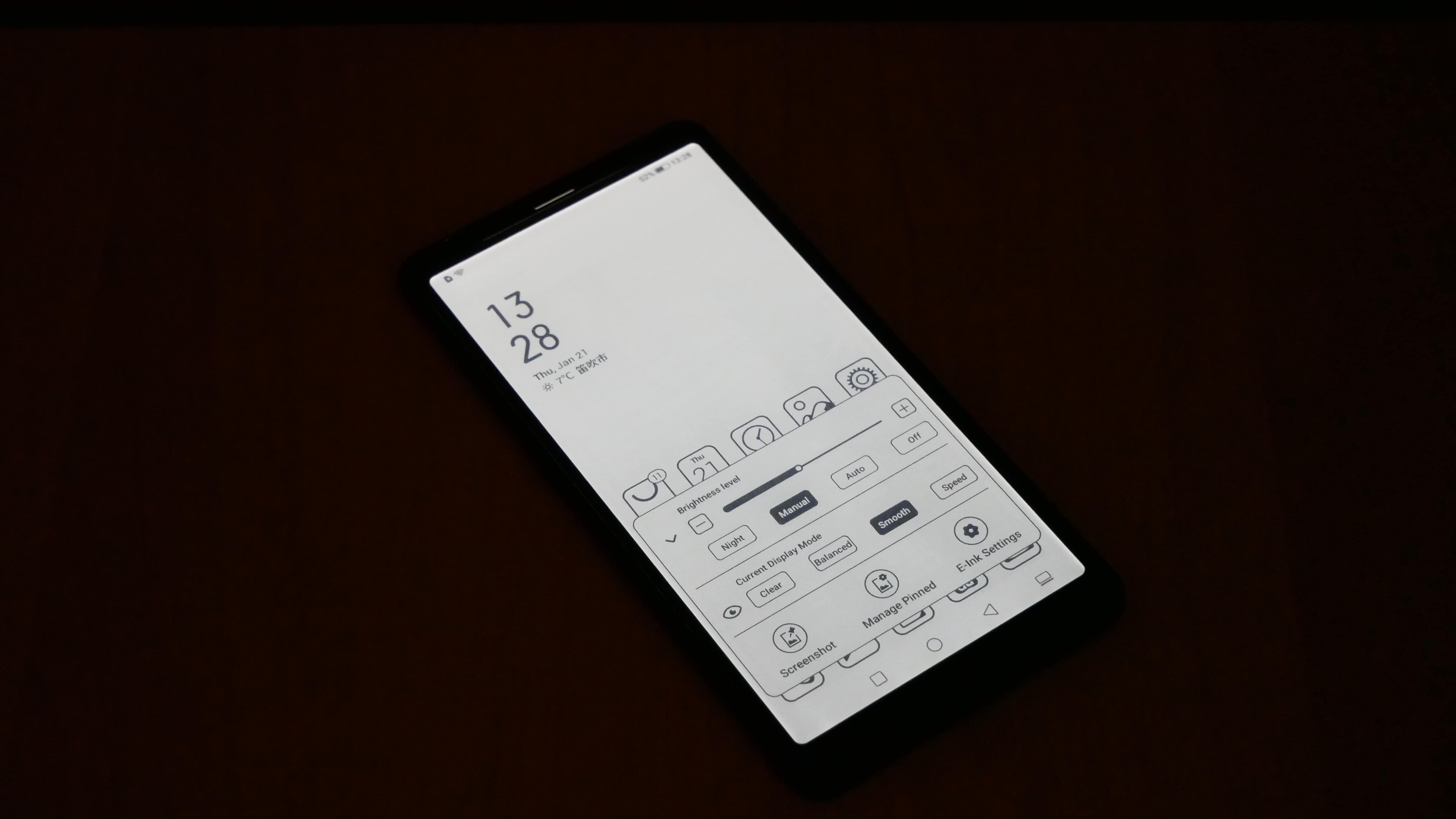 The Hisense A7 has a 6.7 inch display with a resolution of 900×1800 with 300 PPI. It has a front-lit display with LED lights alongside the bottom of the bezel and project light evenly across the screen and not into your eyes. The lightning system can be totally turned off, completely shutting the LED lights down.This device has a glass based screen that is flush with the bezel.

Hisense is primarily billing this phone as a daily driver and also an e-reader. Its screen is larger than an Amazon Kindle, so you can easily fit more text on the screen, even if you increase the size of the font. There is a reading mode function, so you can eliminate any distractions, such as popup or email notifications. You can switch between landscape and portrait mode, which is great. It has a new dynamic refresh mode, to eliminate ghosting. You have two different modes, clear mode, which is geared towards reading and speed mode, which is geared towards internet browsing, animations and apps. 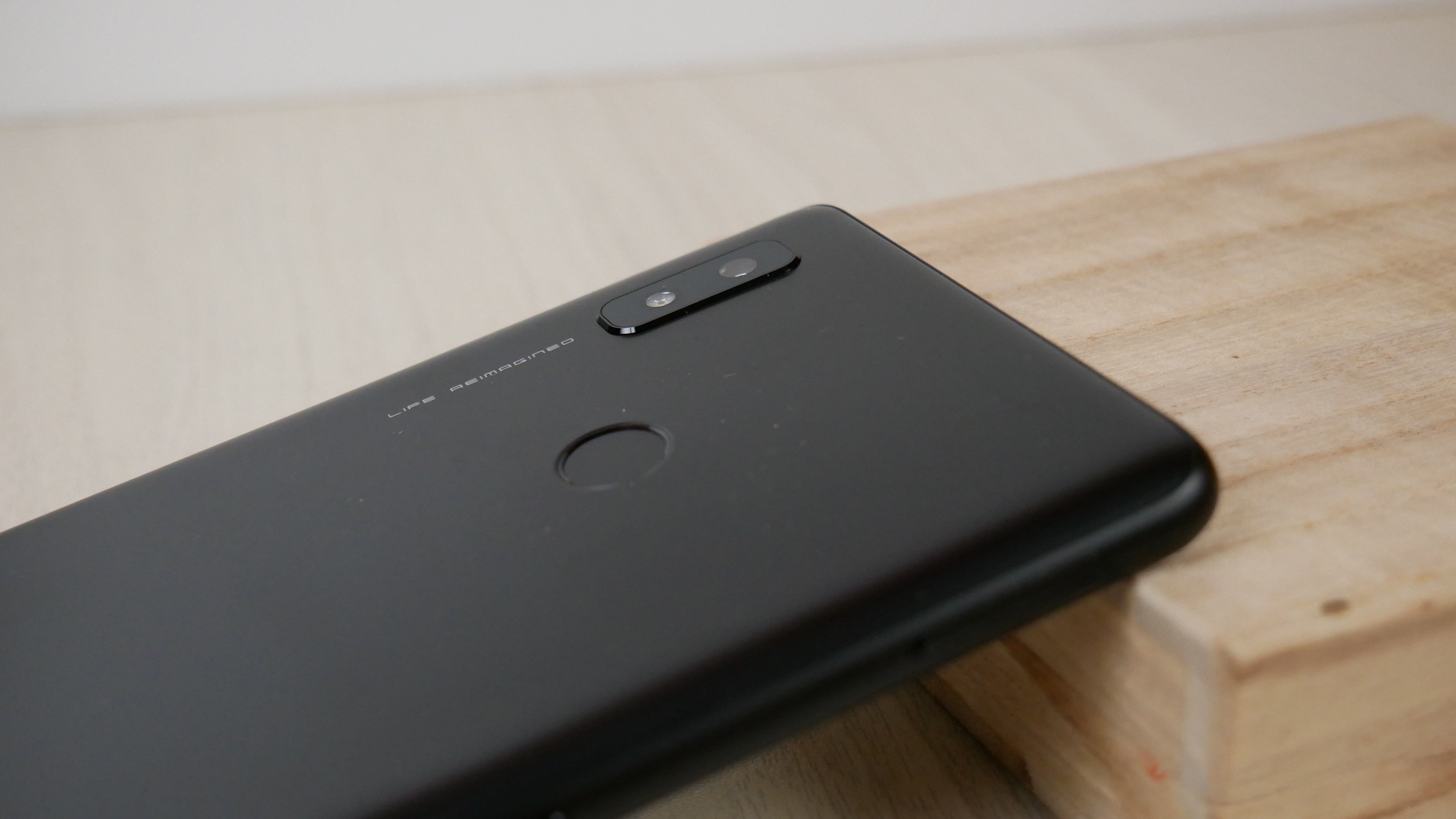 The back of the phone has a fingerprint scanner, which can be used to unlock the phone. There is also a rear facing 16 MP camera. The power button and volume buttons are on the right side and E INK button on the left. The E INK button can be mapped to do anything you want, or launch apps. Out of the box, you can use this button to initiate a full page refresh, The front of the phone has a speaker grill, used for audio calls and it also has a front-facing 5MP camera for video conferencing, such as Zoom or selfies. It can also be used for unlocking your phone with your face.

Underneath the hood is a Unisoc Tiger T7510 8 core processor, 6GB RAM and 128 GB of internal storage. It has a 3.5 mm headphone jack to listen to music or podcasts, but also a speaker. It has a HIFI amplifier, and Hisense has said this is the best sounding speaker they made on an E INK phone. It is 33% louder than the A5 Pro. You can charge the A7 with the USB-C port and plug it into your computer or a wall charger. It has a giant 4770 mAh battery and has quick charging.

The Hisense A7 is a very capable phone and is only available with a black and white e-paper display. It is also fairly expensive, due to the 5G chip, larger screen and excellent hardware specs. You can order it on the Good e-Reader Store for $479. 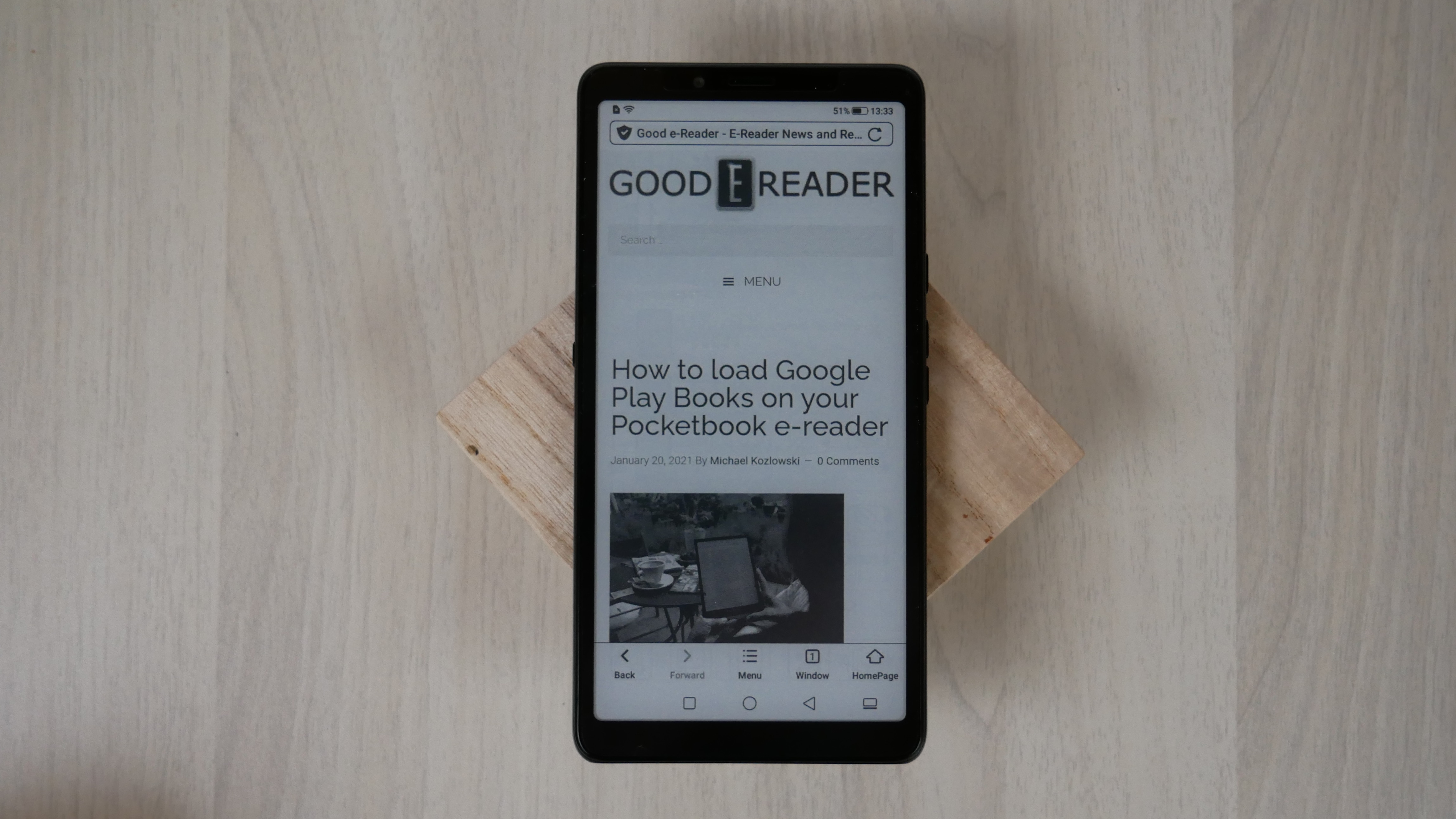 The Hisense A7 is running Google Android 10, which is a very modern OS. This provides a myriad of security features that are updated automatically by Google. Hisense also pushes their own updates, which introduces new features, addresses bugs and stability. This is a typical Android phone. You can do everything you normally would on any other phone, the big exception it that it is running E INK, so it has lots of optimization features devoted towards this type of display. For example you can take screenshots, not by pressing a combination of buttons, but simply dragging three fingers down form the top of the screen, to the bottom.

Let’s talk about what this phone does, that is very unique, that most other Android phones don’t have.  It  comes with 4 different refresh modes, that are similar to the Onyx Boox line of e-readers. The normal one is clear mode, which gives you nice looking app icons, text, and PDF image clarity, it also has the same A2 mode, which degrades image quality, and provides a slight increase to performance.  The two extra modes are the speedX and X-mode which makes playing videos, or light gaming a very real thing.

Hisense has their own launcher that replaces the default vanilla Android experience. There is a default widget that shows the time and date, but you can install anything else you want via apps, such as a weather widget. In the top right corner is the WIFI symbol and time, the top left is where your notifications are. If you drag your finger down from the top center of the screen, downwards, there are a bunch of customization settings. You can turn auto rotate on/off, flashlight, WIFI network, data connection, ringer on/off, establish a hotspot, engage in power saver mode, take a screenshot, location and engage Bluetooth for wireless accessories, such headphones. This screen is also where you can adjust the front-lit display. This phone has white LED lights on the bottom of the screen and project light upwards, evenly illuminating the screen and not shining in your eyes. If you scroll your page to the left, you get a very unique Hisense experience. There is all sorts of RSS news publications you can subscribe to, gives you a breakdown of how many hours you have been using the phone on a daily, weekly or monthly basis. There is a bunch of micro-widgets that give other information.

One of the best things this phone does, is give you the option to automatically assign different speed modes to, on an app by app basis. For example, you might want to have YouTube or the internet browser on Speed Mode, so navigation and watching videos can be a thing. The e-reading app might want to be in clear mode, whenever it starts, so you can read at high resolution. 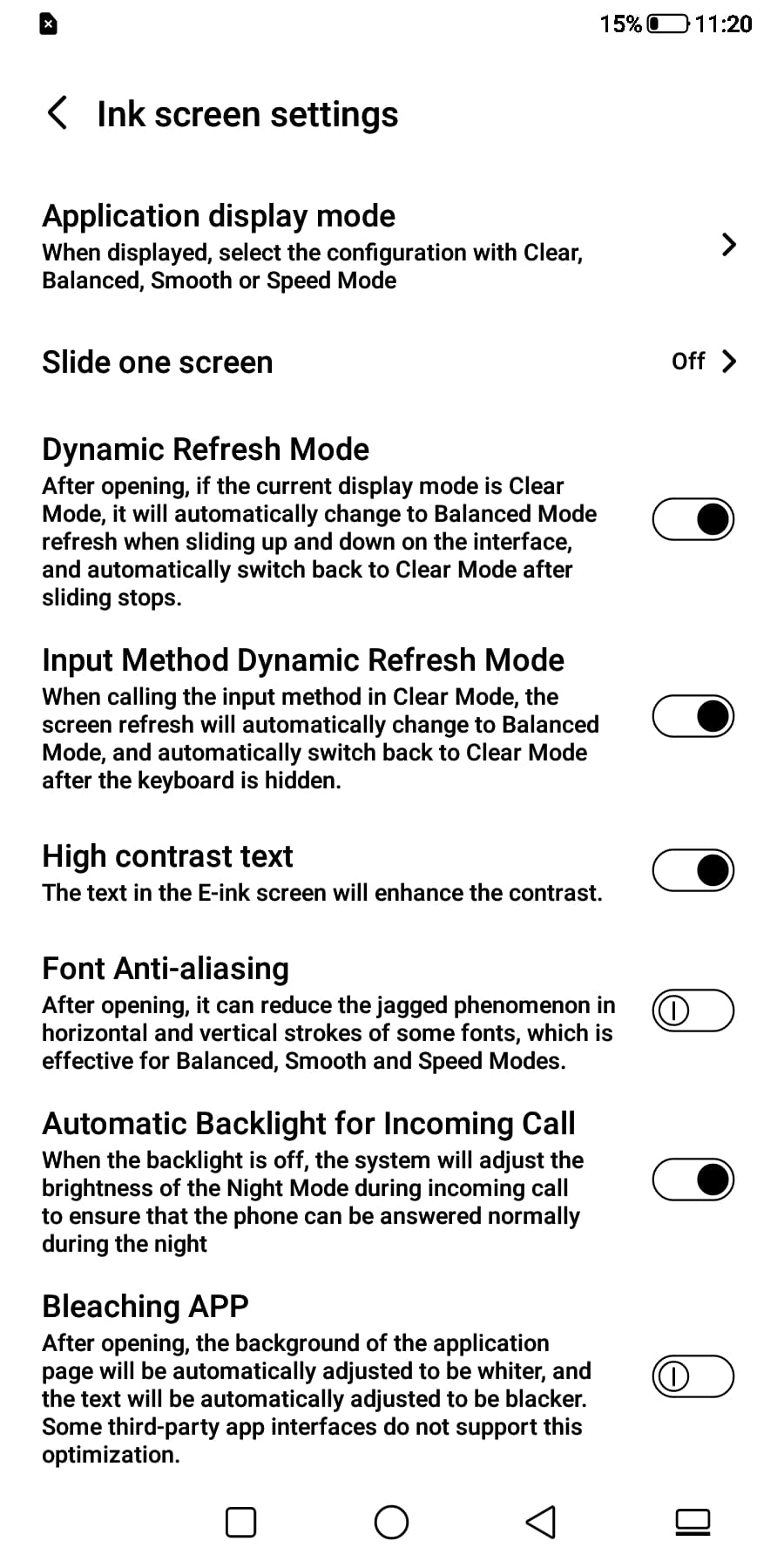 If you want to have greater control over the E INK experience, Hisense has introduced a number of new features. There is an anti-aliasing option to make fonts razor sharp, and not blurry. There is a new contrast mode to make the differences between black and white more pronounced. You can see from the screenshot there are tons of new options you can use.

The only downside of this phone, is that it is not certified by Google, so you will not get Google Play and any app that requires Google Play Framework will not work properly. This sucks for major apps. The Hisense App Store has all sorts of apps available, but since this phone is primarily marketed in China, most of the apps are in Chinese. On the positive side, the cellular bands, 5G work in almost every major country and the system language can be set to English and hundreds of other languages.  If installing apps is important, you can download alternative app stores, or sideload in your own apps. It is possible to install the open source Gapps alternative to Google Play, we will be filming a future video on how to do this, but you can visit the site here.  All you need to do to get started is select ARM64, and Android 10 and the Super package, which includes all Google apps.  There is a detailed instruction guide for Hisense Phones HERE. 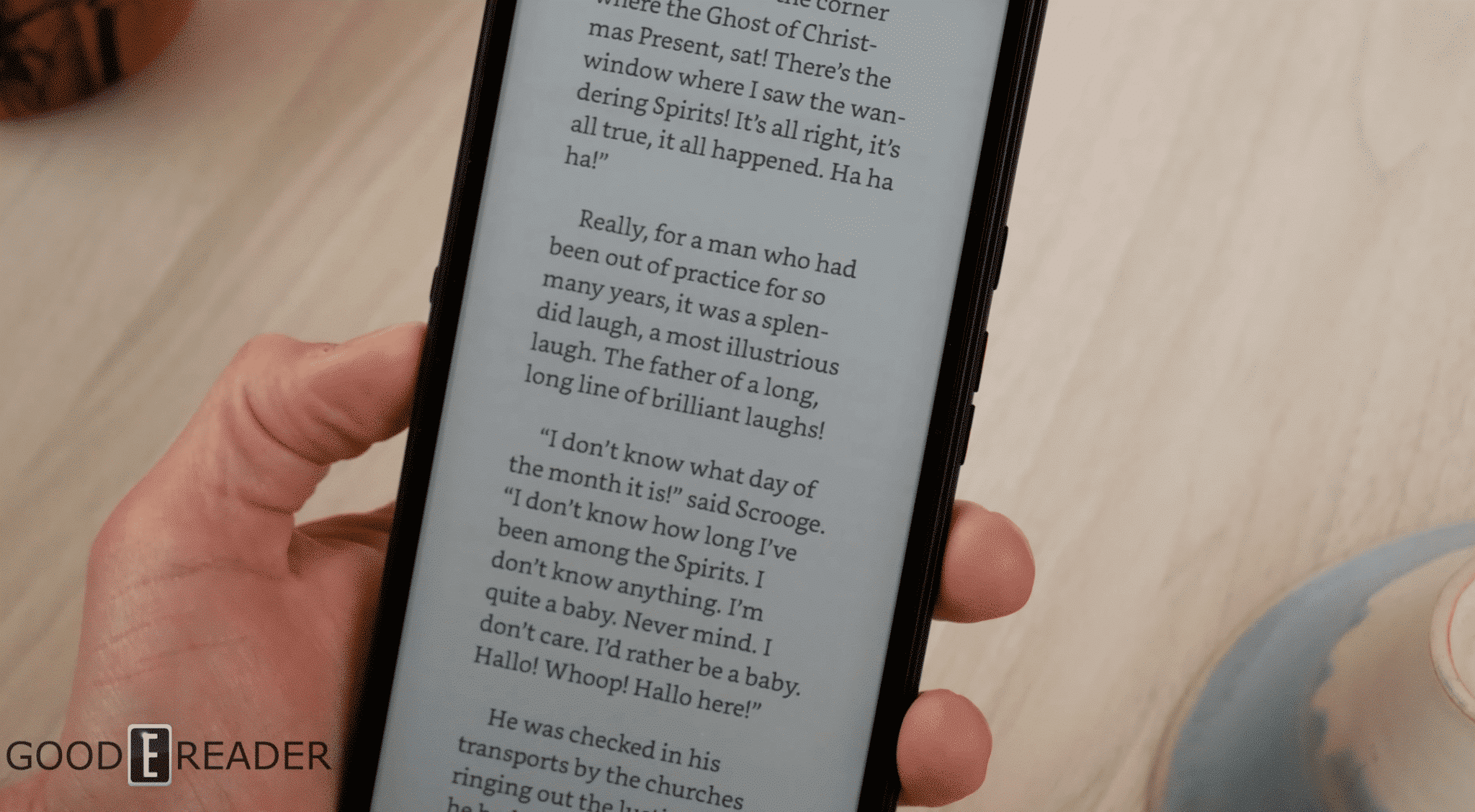 The Hisense A7 is the largest E INK smartphone ever made. Prior phones screen size were only 5.84 inches and this is 6.7 inches, about the same size as the Apple iPhone Pro Max. Given that this is phone is made of e-paper, it is ideal for people who need a phone that is easy on the eyes and will not create eye strain. This is seriously very ideal for the crowd of people with vision disorders who get a headache when looking at a traditional LCD/LED phone for long reading sessions.

This phone default reading app supports all of the major formats, such as EPUB, PDF, MOBI, TXT, DOC, CBR and CBZ. The large screen is ideal for reading ebooks, comics and manga. You do not need to pinch and zoom to read the frames, this is also ideal for webtoons. The stock app does a great job for people who want to sideload in their own ebooks. You can increase the font size, augment the font type, change the line spacing or margins. Given that this is running Android 10, you likely have your pool of favorite reading apps. This could be Kindle, Kobo, Nook, Moon+ Reader, Perfect Viewer, comixology, manga box, Overdrive Libby or anything else. You can sideload these apps, or download the Good e-Reader App Store for E INK or download apps from sites such as APKMIRROR. I suggest doing the legwork and installing Gapps, since you can get Google Play working.

PDF files aren’t that great on here, since they were basically designed for A4/A5 sized screens, which are 10.3 and 13.3 respectively. The performance of PDF files on the Hisense A7 is good, but be prepared for pinching and zooming, especially for technical documents.

If you need an e-paper phone, because you like the technology or have vision problems, where E INK is a must, you finally have a really good piece of hardware, that won’t break the bank. The large screen, excellent hardware, great illumination experience via the front-light will provide hours of usage and reading.

On a typical day I read the daily news on apps such as Thomson Reuters, Feedly and Google News. In the afternoon I checked in on a few subreddits I follow and in the evening, I read Ready Player Two on the Kindle app. Likely you have a different flow when reading, but this phone can last weeks on a single charge, unlike iPhones and most Android phones, which are lucky to get more than a day.