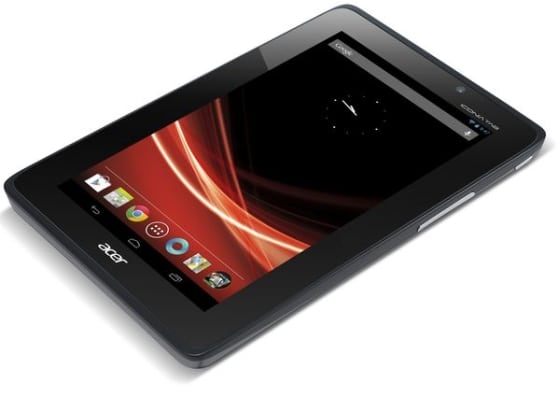 If a tablet is in the 7 inch category, the price has to be less than $200 to ensure its survival. That seems to be the price standard, set by the Kindle Fire and Nexus 7. Acer, following the price standard, intends on launching its new Iconia Tab A110 device in the UK this September for £175 , as per stuff.tv. One of the most exciting elements of this new device is that it will run Jelly Bean when it is launched.

Specifications include the now familiar Nvidia quad core chip rated at 1.2 GHz, 1 GB RAM, and 8 GB of internal storage. The 7 inch display will pack in 1024 x 600 pixels, which is quite a few pixels less than the 1280 x 800 resolution Nexus 7 display. However, the A110 scores over the Google tablet in that it offers a microSD card slot that will allow for 32 GB of more storage.

Also, while there is no word yet on its arrival at the US rental scene, that it has already made it to the FCC is ample proof of the tablet being not too far from an official launch. The A110 was first showcased during Computex 2012, but has maintained a low profile since then. Maybe all of that is set to change in the coming months.